Four-cylinder AMG C63 is seriously fast at the Nurburgring, but what about the sound?

We will certainly miss the V8 roar.

It would be easy to criticise Mercedes-AMG for ditching the sweet-sounding V8 for the next-generation C63, but the truth of the matter is, the boys and girls from Affalterbach have to conform with stricter emissions regulations. The V8 will be sticking around until at least the start of the next decade, but you'll have to step up to bigger and more expensive models to get the 4.0-litre unit.

As for the C63, it will borrow the 2.0-litre (M139) unit from the compact "45" models, but with a couple of major changes. First of all, the four-pot will be mounted longitudinally and is going to feature an electric turbocharger identical to that of the hotly anticipated AMG One hypercar. The combustion engine alone will be good for 442 bhp (330 kilowatts), and that's before the electric bits come into play.

How does it sound? The attached video should answer this burning question.

Likely to be called Mercedes-AMG C63 S E Performance in its range-topping guise, the hybridised machine has been spotted at the Nürburgring in sedan and wagon body styles. The prototypes are undoubtedly fast, but some would argue the soundtrack leaves much to be desired when compared to the V8's roar.

The C63 needs to adapt in order to survive in the downsizing era, and doing so requires an electric motor to offset the loss of four cylinders. The rear-mounted electric motor is good for 201 bhp (150 kW) and 236 lb-ft (320 Nm) in 10-second bursts and delivers a continuous output of at least 94 bhp (70 kW). As if that wasn't complicated enough, there's also a belt-driven starter-alternator producing 14 bhp and used to fire up the combustion engine. It also serves a second role when the high-voltage battery is running low by making sure the AC and lights work properly. 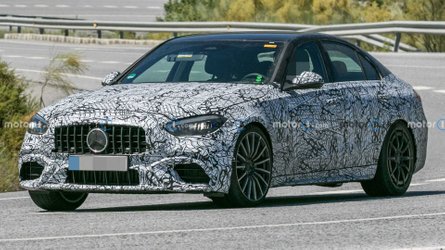 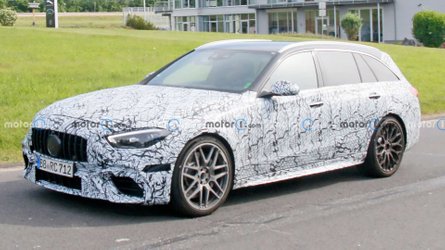 Weight will certainly be a concern, especially once you factor in the 6.1-kWh lithium-ion battery pack and the electric motor's two-speed transmission. The next C63 will be a plug-in hybrid, one that is going to "surpasses comparable current vehicles with V8 engines without hybrid drive" per AMG. Doing the maths, the PHEV setup should have 643 bhp on tap for a brief period of time, with well over 500 bhp at all times.

Other notable changes over the old C63 include the adoption of all-wheel drive and even an EV mode. In terms of performance, we're hearing the sprint to 62 mph (100 km/h) will take less than three and a half seconds, which wouldn't be too shabby for a car equipped with only a four-cylinder engine.

The camouflage should come off in 2022 for both body styles when the C63 will complement other E Performance models, the new electrified AMG GT 63 S E Performance, and hopefully, the production-ready AMG One.