It looks much more elegant than the current model.

Honda is working on the next-generation CR-V, one of the US’s best-selling vehicles, and it looks like it’ll be getting a huge update over the current fifth-generation model. The latest spy shots gave us our best glimpse yet at the new crossover, revealing more of its new design than ever before. A new rendering from our friends at Motor.es melts away that camouflage to imagine what it could look like when Honda reveals it.

No amount of camouflage could hide the CR-V’s thoroughly revised styling, which appears to have taken its final form in our last batch of spy photos. The rendering translates what we can see into a crossover rendering that paints the model as having a much more mature design. The CR-V looks longer than the current model, and the front and rear overhangs look extended, too. The front end is squarer and less angular, while the thin-slit headlights are connected by a chrome strip that spans the trapezoidal grille. Sleek fog lights flank the lower grille opening.

The rendering only previews the model’s front three-quarters, so we can’t see the rear. However, spy shots have appeared to show the CR-V receiving a subtler rear-end design. Camouflage has covered the rear taillights, so we don’t know how they’ll differ from the current model, though we expect much more refined styling, similar to what Honda did with the updated Civic.

Check Out The Next-Gen CR-V: 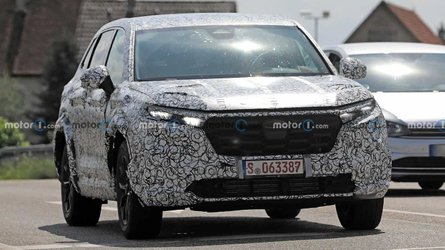 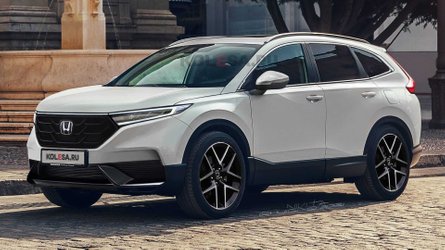 We don’t know what will be underpinning the next-generation CR-V or what powertrains it will have. Spy shots have shown the car wearing twin exhaust pipes, indicating there’s a combustion engine powering it, though we expect Honda to offer electrified variants with a fully electric version allegedly planned to arrive later in its lifecycle. The next-gen CR-V’s larger footprint could allow Honda to offer a three-row version. It’s only available as a five-seat model in the US right now, though a seven-seat variant is already available in some markets including the UK.

We expect Honda to reveal the new CR-V next year.