The 2023 Chevrolet Corvette Z06 is scheduled for a full reveal on October 26. However, Chevy is giving us an early preview by showing off the performance car’s exterior design, revealing the mid-engine Corvette with an even more aggressive design. Spy shots have shown the coupe covered in camouflage and, frequently, with a massive rear wing, though it’s absent in Chevy’s latest reveal.

The big wing’s absence lends credence to the notion that the big wing will be part of an optional performance package, though the regular Z06 should offer plenty of it. The car allegedly uses a 5.5-litre V8 with a flat-plane crankshaft and dual overhead camshafts. It’s a version of the engine used in the C8.R race car, which Chevy has photographed together with the new Z06. It could produce 617 bhp (460 kilowatts). Power will route to the wheels through a Tremec-sourced transmission.

The latest photo from Chevy gives us our first clear look at the car’s exterior, revealing a new fascia, unique wheels, and other minor tweaks. Everything below the bonnet’s leading edge looks new, with a new grille opening, tweaked intake designs, and a more aggressive front splitter. New rear quarter panels tweak the side air intakes’ design along the side, further enhanced by a new door sill piece. Sadly, we can’t see the rear, though spy shots hinted at a new bumper design, quad exhaust pipes, and other sporty upgrades. 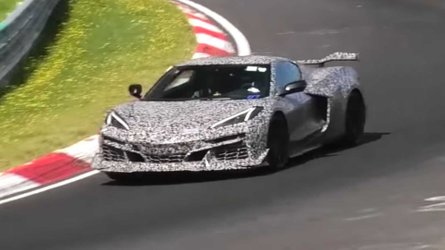 Listen to the Corvette Z06 compared to the regular Corvette
⠀ 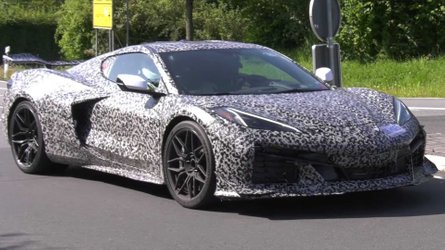 We’ll get all the details in a month when Chevy reveals the 2023 Corvette Z06 on Tuesday, October 26. We expect Chevy to dish more Z06 details as the car’s reveal date approaches. Powertrain details are still a mystery, and we don’t know the extent of the interior updates coming to the high-performance model, though we don’t expect any significant interior upgrades. Chevy is calling the Z06 a 2023 model, which likely means the car won’t arrive at dealer lots anytime soon. Chevy will announce the model’s availability this fall.