Mercedes might be heading to an all-electric future, but there's still life in the twin-turbo 4.0-litre engine.

It's safe to say AMG is in a bit of a pickle right now, with some of its V8s having quality issues in cars sold in the US, according to the man in charge of Mercedes' performance division. The same Philipp Scheimer does have good news to share as he believes the twin-turbo 4.0-litre still has plenty of life left in it even though parent company Daimler is moving away from internal combustion engines to prepare for the unavoidable EV era.

Asked by Road and Track about the fate of the ol' V8, AMG's head honcho said: "I think there will be a future, yes. I think for the next ten years we will see V8s, for sure. We have a lot of customers who love their cars and I still think that we will see those people buying the cars for a long time. We have really a very high demand all over the world."

Even though AMG won't develop a next-generation V8 engine since that ship has sailed due to electrification taking over, the engineers are still finding ways to update the existing powertrain. Not only that, but the combustion engine is being updated to become a central part of a plug-in hybrid setup, as demonstrated in the new GT 63 S E-Performance. The ICE works with a rear electric motor to develop a total output of 831 bhp (620 kW) and 1,033 lb-ft (1,400 Nm), effectively making it the most powerful AMG to date considering the One hypercar has not been revealed in production guise yet.

While the V8 is here to stay for the time being, logic tells us only the top-tier AMGs will continue to have it. As a matter of fact, the next-generation C63 – and by extension, the GLC 63 – will lose the 4.0-litre unit in favour of a heavily electrified four-cylinder adapted from the AMG 45 models. The E63 is likely next in line to lose a few cylinders, but it remains to be seen whether it will happen with the next-gen model.

AMG's most powerful production car yet: 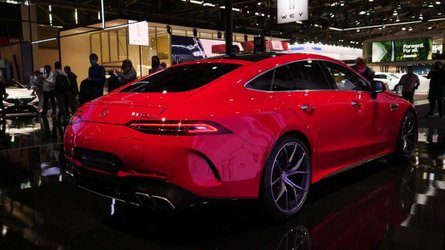 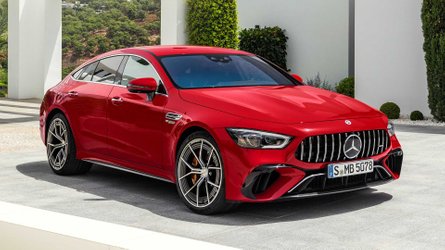 Bear in mind Mercedes has expressed its interest in going completely electric by the end of the decade, at least "where market conditions allow." AMG has already hopped on the EV bandwagon with the EQS 53, with the smaller EQE 53 likely not far behind seeing as how prototypes have already been spied undergoing testing.