Is that you, Urus Evo?

The Lamborghini Urus rocked the supercar world when it entered production in 2018, and not just because it was a Lambo SUV. With 650 bhp (485 kilowatts) from its twin-turbocharged 4.0-litre V8 powering all four wheels, this sizeable people mover could rival proper supercars to 60 mph and reach 186 mph flat out. It hasn't changed since its debut, but changes are coming.

The latest evidence for that is a Urus with a manufacturer number plate carrying some interesting test equipment on the back. The clip comes from Varryx on YouTube, presumably from Lamborghini's slice of Italy near Sant'Agata Bolognese. As far as spy videos go, there's nothing hidden by camouflage wrap or clever coverings. This Urus looks like a completely normal model you can buy right now, but then it passes the camera and we see two microphones fastened to the rear, aiming towards the dual exhaust tips on each side of the fascia. Interesting.

It's also interesting how slowly the Urus passes by the camera, as if trying hard not to let too much sound escape the pipes. The initial pass and resulting low-pitched burble tells us there's definitely still a V8 under the bonnet, so we aren't dealing with a V10 or V12 powertrain mule. The exhaust does sound a bit more throaty, however. Not overtly so, but it seems a bit more pronounced compared to other stock Urus exhaust clips we've heard. Admittedly, background sound and the very gentle throttle application in this video make it tough to reach any firm conclusions. 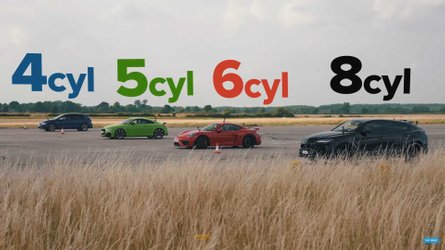 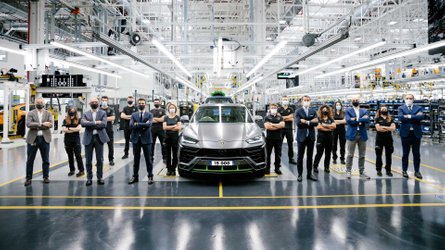 Why would Lamborghini be sampling the exhaust note on a Urus? If there is an upgrade to the engine and exhaust system in the works, decibel readings could be required for certification testing. That is the obvious answer, but it could also be simple research and development on the current setup. For that matter, it could also be some kind of sound sampling for a video project, though it seems odd that the Urus would be driven so carefully in the presence of the spy camera.

Whatever is happening, we'll offer this bit of insight. The Urus is three years old and we've yet to see any evolution of the model, but we know it's coming. Camouflaged prototype sightings confirm it, so perhaps we're getting an aural sampling of what's to come.