It wears a special Audi Exclusive paint and has already been tuned.

Due to Audi's positioning in the Volkswagen Group hierarchy, the RS Q8 is not allowed to fully go up against the Porsche Cayenne Turbo GT, let alone the Lamborghini Urus. That doesn't make Ingolstadt's flagship SUV any less desirable, especially if it has a lovely spec as it's the case with this one-off version. It's known as the "1 of 1 Qatar Edition" and we're being told the owner had to wait a year to take delivery.

The unique RS Q8 was commissioned in a flashy Austin Yellow shade, a pricey Audi Exclusive paint complemented on the inside by an identical hue for the contrast stitching also part of the upgrades available through the Audi Exclusive catalogue. Our friend Auditography spent some quality time with the special SUV in Doha, Qatar and learned it has several other extras.

Audi Sport's range-topping SUV has already received an ECU tune for the twin-turbo 4.0-litre V8 courtesy of ABT Sportsline. Not only that, but the RS Q8 now also boasts a custom Akrapovic exhaust system providing a raspy soundtrack you'd typically expect from a proper supercar rather than a large and heavy SUV.

With the mods in place, the engine now churns 740 bhp (551 kilowatts) and 679 pound-feet (920 Newton-metres) of torque. It's enough to send the Audi RS Q8 to 62 mph (100 km/h) in about three seconds before topping out at over 205 mph (330 km/h). Given the performance and design, one could argue it now has what it takes to make even diehard anti-SUV people weak at the knees.

Modded RS Q8s are not that uncommon: 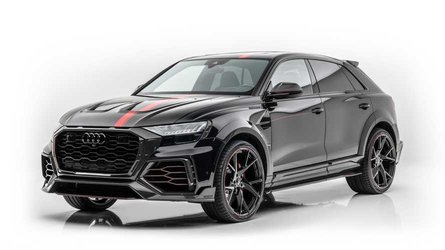 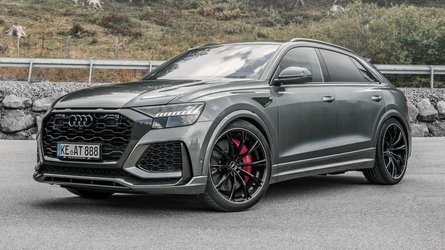 Audi RS Q8 by ABT has Lamborghini Urus-beating power

Getting behind the wheel of such a high-spec RS Q8 certainly doesn't come cheap, especially since the base version already starts at £103,925 in the United Kingdom. An Audi Exclusive paint alone costs an extra £3,500 while those 23-inch wheels with a 5-Y-spoke rotor design will set you back an additional £2,400. Factor in the Black Optic Package (£2,400) and the ceramic brakes (£6,150), this is one pricey SUV, and that's before the Audi Exclusive interior upgrades.

As exorbitant as the price may be, let's remember the mechanically related Porsche Cayenne Turbo GT begins at £143,910 while the Lamborghini Urus costs well over £170,000 before you tick any boxes on the options list.