The crazy cop car is being trialled by police in London.

Ford has turned its new Mustang Mach-E high-performance electric SUV into a full-blown police interceptor. The rapid electric model has already drawn attention from seven UK police forces, who have either tested the vehicle or requested a full evaluation of a specially built concept car.

That concept vehicle, which went on display at the Emergency Services Show at Birmingham’s NEC this week, is the vehicle you see in these pictures. Ford says it was built after police forces approached the company in search of “greener solutions” for their ‘blue-light’ fleets.

Ford claims London’s Metropolitan Police Force has already appraised the standard Mustang Mach-E and has now requested a full evaluation of the marked concept. And other police forces are also waiting to try the new vehicle, including Sussex, Surrey, Devon and Cornwall, South Wales, and Police Scotland.

The initial concept car is a converted Mustang Mach-E Standard Range AWD model, but Ford is planning to offer Extended Range versions with a choice of rear- and all-wheel drive. Every version would come with a range of more than 200 miles on a single charge, as well as rapid acceleration from the electric motors.

This converted model was tweaked by Ford’s long term partner firm, Safeguard SVP, which is a specialist constructor based in Essex. The company fitted bespoke mounting pods and brackets for police equipment, while trying to cause the minimum amount of damage to the vehicle.

Safeguard SVP even fitted a special police livery design that uses “high-specification” materials to “maximise day and night visibility requirements”. And the lighting systems all use LEDs, which have little power consumption and reduce the current draw on the vehicle’s 12-volt ancillary power system.

“The vehicle range is uncompromised as the blue light equipment is being drawn from the vehicle’s 12V battery and not the drive battery,” said Terry Adams, the ‘blue light’ direct sales manager, at Ford of Britain and Ireland. “In future developments we will look to increase this battery capacity to allow for additional equipment to be fitted.”

The Mustang Mach-E is not the only vehicle Ford is displaying at the NEC’s Emergency Services Show. The Blue Oval has also revealed a new five-tonne “protected personnel carrier” version of its Transit van.

Fitted with an “adjustable” rear cell and storage areas in what would normally be the load bay, the van is designed to offer police forces “greater flexibility” when on duty. 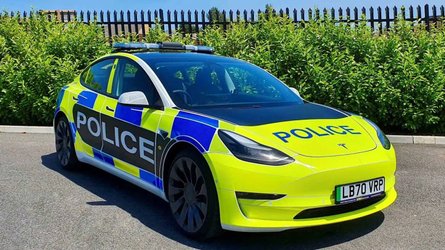 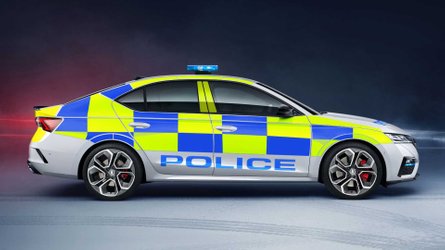