It was precisely on March 7, 2017, when Mercedes-AMG unveiled the GT Concept to preview what was to become Affalterbach's answer to the Porsche Panamera. The showcar from Geneva also served as a taste of things to come regarding an extremely powerful plug-in hybrid setup to compete with the Zuffenhausen's Turbo S E-Hybrid. Fast forward to August 26, 2021, the production version is being teased to announce a September 1 debut.

Previewed extensively in recent months, the new range-topping version of the AMG GT 4-Door Coupe family has been speculatively called the "GT73e" However, nothing is official at this point as some report it will go by the name of AMG GT63 E-Performance. What we do know is that it will combine the twin-turbo 4.0-litre V8 (M177) engine with an electric motor to deliver a total output of over 600 kilowatts, so about 805 bhp. Combined torque? A mountain-moving 738 pound-feet (1,001 Newton-metres).

It will be sold under the newly formed "E Performance" banner, which will also include the next-generation AMG C63 equipped with an electrified four-cylinder engine, as well as the F1-derived AMG One hypercar. The new four-door PHEV has already been confirmed to hit 60 mph in under three seconds to beat the AMG GT63 S' 3.1-second time.

Mounted at the rear axle for better weight distribution will be the electric drive unit consisting of an e-motor, a two-speed transmission, and a limited-slip differential. The electric motor will deliver a peak power (for ten seconds) of 150 kW (70 kW continuous power) and an instant torque of 236 lb-ft (320 Nm). It's going to receive the necessary juice from a 6.1-kWh battery pack weighing 89 kilograms (196 pounds).

It goes without saying the PHEV version will be the most expensive AMG GT 4-Door Coupe of the bunch, eclipsing the £141,855 GT63 S. It remains to be seen whether it will hit the £150,000 mark in its standard guise or a few options will be "necessary" to get there. Regardless, it will likely become the most expensive Mercedes model outside of the V12 Maybach S-Class and AMG One.

Following its world premiere next Wednesday, the new performance PHEV will arrive a few days later at IAA Munich where it will share the spotlight with the fully electric AMG EQS and the new Benz-branded EQE smaller saloon. 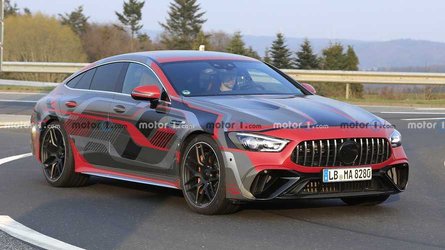 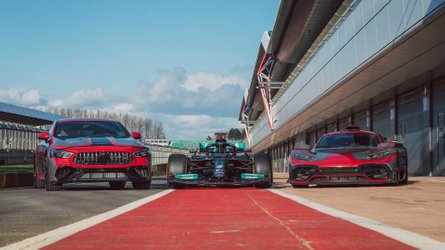