Its looks are deceiving.

We know Aston Martin has plans to expand its DBX lineup to include hybrid variants, and a new batch of spy shots gives us a glimpse of what to expect. However, there aren’t any exterior changes at first glance, and you wouldn’t be incorrect to believe this is just a regular DBX. However, the photos show the DBX with a yellow sticker in the rear window, informing Nurburgring fire officials that this SUV has an electrified powertrain.

Earlier this week, Aston Martin CEO Tobias Moers revealed that the mild-hybrid DBX would arrive before the end of the year, which is likely the prototype vehicle in the spy shots. We expect Aston to pair a supercharged 3.0-litre straight-six engine with an electric motor, though we don’t have any indication of what its output will be. The AMG-supplied twin-turbocharged 4.0-litre V8 produces 542 bhp (404 kilowatts) and 516 pound-feet (699 Newton-metres) of torque.

We doubt this is the plug-in variant because we can only spot the fuel door on the rear quarter panel. The plug-in DBX isn’t expected to arrive until 2023 for the 2024 model year, so it feels a bit premature for Aston to be testing it already. This model will pair the DBX’s V8 with an electric motor to produce as much as 700 bhp (521 kilowatts), with its peak output capable of reaching 800 bhp (596 kW). 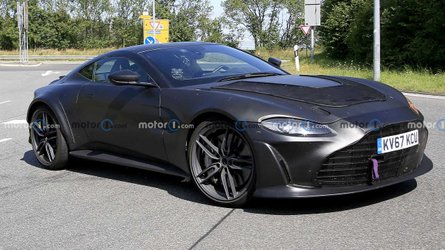 Aston Martin Vantage spied with V12 possibly under the bonnet 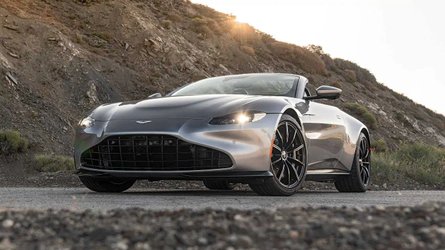 The mild-hybrid version, spotted testing near the famous race track, will be one of several DBX variants Aston will offer by 2024, which could include a seven-seat model or something even sportier. The SUV is pivotal to the brand’s future success, as it accounts for more than half of the brand’s global sales less than a year after it entered production. SUVs are popular right now, and giving customers more powertrain choices only makes Aston’s products more appealing to a broader and broader audience.