There were no serious injuries in this wild crash.

It's incredible there were only two injuries resulting from this dramatic crash, and none of the reported injuries were serious. We say that not just because the car in question launched through the air and hit a building. It hit a Wendy's fast-food restaurant during the weekday lunch rush. Blimey.

The crash occurred on Monday 16 August at approximately 1:00 p.m. local time in South Brunswick, New Jersey. The South Brunswick Township Police Department reported the incident on its Twitter account, showing a dramatic crash scene with one mangled car on its side and another heavily damaged car in front of it. According to the post, firefighters had to extract the driver from the car on its side.

A second video shared by the South Brunswick PD on 19 August shows surveillance footage of the crash as it happened, and it's even more startling. The car suddenly appears in the upper right corner of the shot, clearing parked cars before landing hard on its nose, impacting another car waiting in the drive-through lane. A second angle shows the car crashing into an outside dining area at the front corner of the building, striking an empty table next to a family sitting at an adjacent table.

According to WJHL, the car in question was a Toyota Corolla. It's believed the driver suffered some kind of medical event, leading to the crash. The Corolla impacted an Audi in the drive-through lane and both vehicles then struck the building, causing considerable damage. Despite the collision and the resulting debris, there were no reported injuries from inside the restaurant. The driver was removed from the Toyota and taken to a nearby hospital in stable condition. The only other reported injury was from a child in the Audi complaining of pain. The report states family members took the child to the hospital as a precautionary measure.

The camera catches all: 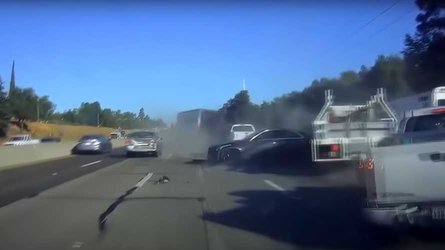 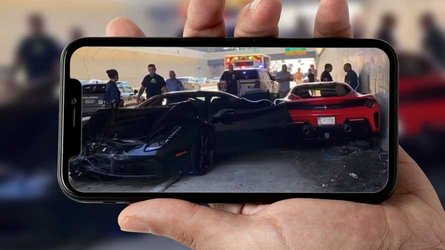 See three Ferraris crash into each other on motorway

Considering this crash happened at perhaps the restaurant's busiest time of day, it truly is remarkable there were no additional injuries. Stay safe out there everyone.