The clip shows it on the Nürburgring.

The 2023 Chevrolet Corvette Z06 C8 will debut on 26 October 2021. To hype the new sports car, Chevy released a teaser video showing the Z06 on the road in Germany and France, including at the Nürburgring and at Le Mans.

The video clearly wants to create the connection between the new Z06 and C8.R race car because the competition machine makes several appearances in the clip. The rumour is that the two models also share an engine. The 5.5-litre mill reportedly has dual overhead camshafts and a flat-plane crankshaft. It allegedly makes 617 bhp (460 kilowatts) and revs to a 9,000 rpm redline.

A recent video shows a development vehicle using a Tremec-sourced gearbox with what appeared to be a magnesium case. Recordings of the Z06 indicate the transmission is capable of ultra-quick shifts.

Compared to the standard C8, the Z06 has a larger front splitter with canards at the corners. There's a larger opening in the centre of the lower fascia. The openings in the rear quarter panels are significantly bigger, too.

At the rear, the Z06 in this video has a big wing with upturned sections on each side. A redesigned bumper has four exhaust pipes coming out of the centre and vents at the sides.

More to know about the Z06: 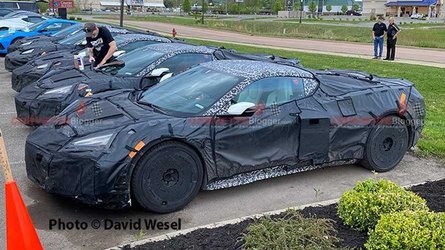 There's some recent evidence that there might be an optional performance package for the Z06. Spy shots show some development vehicles running with the big wheel and five-spoke wheels like the one in this teaser video. Other cars have a spoiler on the rear deck and wheels with seven pairs of Y-shaped spokes.

With Chevy calling the Z06 a 2023 model, we might not see them in showrooms until around the mid-point of 2022. That will feel like a long wait after the October unveiling.