Just listen to it!

The Chevrolet Corvette Z06 C8 continues to lap the Nürburgring for development. This spy video captures a few of them on the famous track, and the clip offers a fantastic earful of the upcoming car's sonorous engine.

Some of the Z06s in this video have a large wing on the back, and others only have a small spoiler on the rear deck. It's not clear whether Chevy intends to offer the model with an option package that would include the huge aerodynamic piece that would possibly include other upgrades for improving performance.

Regardless of what's attached to the rear, all of these Z06s sound fantastic. All the rumours so far suggest the model uses a version of the 5.5-litre V8 from the C8.R race car. That mill has dual overhead camshafts. There's allegedly a flat-plane crankshaft, and the engine can reportedly rev to a 9,000 rpm redline. The output could be 617 bhp (460 kilowatts).

Get another look and listen at the Z06: 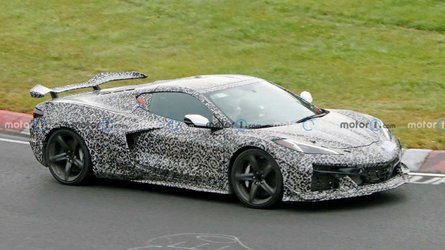 2023 Chevy Corvette Z06 spied at the Nurburgring with less camo
⠀

The transmission's shifts are lightning quick, too. A video from someone climbing under one of the development vehicles indicates the Tremec-sourced gearbox has a magnesium case, which would help save weight.

The new Z06 will debut in the fall. There's speculation that the unveiling could happen at the 2021 Los Angeles Auto Show in November because the timing matches. Don't expect to see the model in showrooms until 2022.