Has the Tesla Model S Plaid met its match this time?

The Tesla Plaid Channel has posted another unique video, as promised. The guys post new Plaid races every week, and they're nothing like most of the other Tesla racing footage we see online. In this recent video just posted today, 17 August 2021, we get to see two Tesla Plaid saloons, along with a beastly Hemi 'Cuda 440 wearing massive slicks.

As the video opens, Tesla Plaid Channel talks about the new Nitto tyres it previously promised to put on the Model S. They point out that it's actually dry in Florida, and the forecast says it will remain dry for a good part of the day, which is very rare for Florida. This is especially true with several tropical storms developing. At any rate, this means there's time for several solid runs.

The video moves quickly into the interesting racing footage. However, if you want to learn specifically about the Nitto NT-01 tyres, there's a brief section at the end of the video that just focuses on the tyres. Essentially, they're a 285/35 Series tyre on lightweight 10 kilogram (23-pound) 20-inch rims. The tyres that came on their Model S Plaid are Michelin 295/30ZR21 on a 21-inch rim. The Nitto is a competition tire made of a softer compound.

The races take place at Show Dragstrip on 11 August 2021. Three of the races are performed with Launch Mode engaged, while the other two are completed without the launch. The best time for the Plaid with Launch Mode and the Nittos is just shy of 6.09 for a 1/8-mile run topping out at nearly 120 mph.

After a few Plaid solo runs, it's time for the 'Cuda. Remember, we've already seen a few crazy, modified trailered beasts outrun the Plaid, so this has the potential to be interesting. We'd rather not spoil it for you, so be sure to check out the video to see it for yourself. Plus, it's followed by the Plaid versus Plaid races that probably attracted you here. 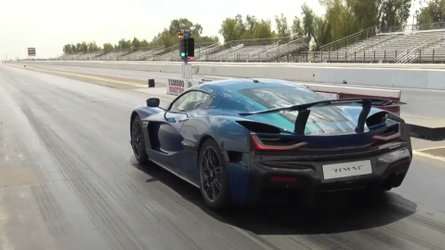 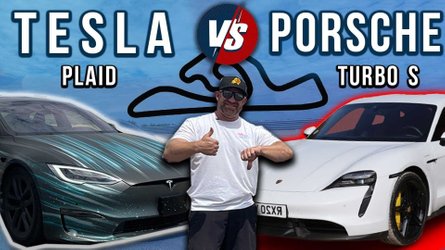