It falls only a few feet, but it looks painful.

This one is bound to make your heart hurt, car enthusiasts. A Ferrari SF90 Stradale was spotted in São Paulo being delivered to its lucky owner, though a rather tense situation has made it a viral sensation on social media. When the 1,000-bhp (745-kilowatt) hybrid Italian hypercar was on the winch ready to come down, it simply fell off the platform.

The Italian machine was on an enclosed flatbed truck, a type that is often requested to transport exclusive cars, such as this custom-built SF90 Stradale, which is worth around R$7 million (£964,000 at current exchange rates). In the video, the Ferrari was in the process of descending on top of the truck's hydraulic platform, but for some reason, the platform simply collapsed all at once with the car on top of it. It's not clear why the platform collapsed. The SF90 isn't that portly.

Apparently, the car suffered no damage. However, things could have been worse. The car was only a few centimetres away from having the front bumper torn off of the car had it been a little further forward. Despite the unexpected situation, the scene was taken in jest by its owner, businessman João Adibe Marques, who even made a joke by posting a photo on his social network with the caption "so beautiful, looks like it fell from heaven.” 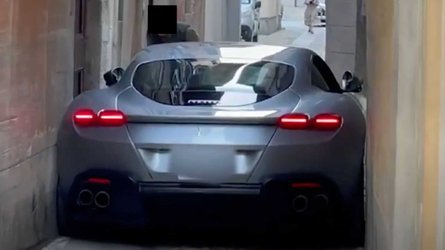 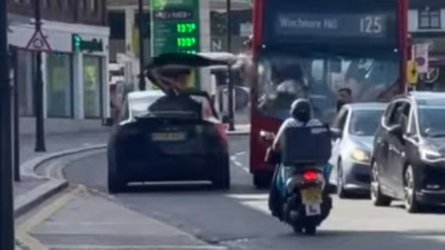 Speaking of the exclusive Ferrari SF90 Stradale, the super sports car was ordered in the bright yellow Giallo Modena colour, which even bears the owner's initials, "JAM." The look is rounded off with five-spoke diamond wheels and a tricolour stripe in the colours of the Italian flag that runs from the bonnet to the rear, colours that also appear below the JAM initials.

The SF90 was launched worldwide in 2019 and is the second hybrid model made by Ferrari in its history (the first was the La Ferrari). It comes equipped with a 780-bhp (581-kW) 3.9-litre twin-turbo V8 engine that works alongside three other electric motors responsible for delivering more than 220 bhp (164 kW). With the two power sources working together, the power output reaches 1,000 bhp – more than the 963 bhp (718 kW) of the famous La Ferrari.

According to Ferrari, the SF90 Stradale accelerates from 0 to 100 kilometres per hour (62 miles per hour) in just 2.5 seconds and is even more surprising when it hits 200 kph (124 mph) in 6.7 seconds. The top speed is 340 kph (211 mph). Despite its value of about R$7 million, the SF90 Stradale is a success among the lovers of the Italian brand in Brazil, so much so that this unit is already the fourth one sold here.