This Corvette-based supercar has two V8 engines in the back

When one LT4 is simply not enough.

If the name Gordon Tronson doesn’t ring a bell in your head, don’t worry - he is not quite famous outside the tuning scene he is occupying. But in the world of twin-engine hot rods, sports cars, and supercars he is a rockstar.

Tronson has made several absolutely bonkers creations, including a Ford Model T with two Ford-sourced racing engines, a Ford Econoline with four (!) engines, and even a four-engine Harley motorcycle. One of his early projects was a Lamborghini Countach built by Tronson from scratch using a 1/24 scale model as a guide.

With all these amazing builds, there’s no denying that this guy is very talented and creative. We know a little about his latest project but it’s already shaping up to be an absolute monster. Road and Track brought Tronson’s new twin-engine supercar to our attention, and all we can say is that it may not look pretty from the outside, but it’s worth our attention for many reasons. One of them being that it is a bloody’ twin-engine supercar.

The yet-unnamed creation made its debut last week outside of Reno and it’s a long, mid-engine supercar with two GM LT4 V8s sitting side-by-side. According to unofficial information, each engine has been fully rebuilt and now features two superchargers for an output of 650 bhp (485 kilowatts) and 640-pound feet (868 Newton-metres) of torque. That’s the power each one of the two V8s produces, which means we are probably looking at a 1,300-bhp (969-kW) monster with a projected top speed of about 290-300 miles per hour (467-483 kilometres per hour). Of course, this is only theoretical.

Not much else is known at the moment, though the supercar is reportedly based around a 2001 Chevrolet Corvette and you can clearly see that by the shape of the doors and the greenhouse. It’s fully custom built from the B-pillar back where the two V8 engines are mounted on a tubular frame. Some of the components are most likely borrowed from other production vehicles, like the headlights which appear to be sourced from an older Hyundai or Lexus model. The taillights seem like just a random aftermarket product but the quad exhaust arrangement between them is hugely impressive. 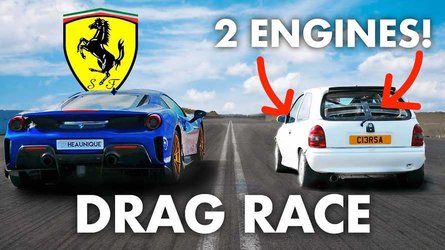 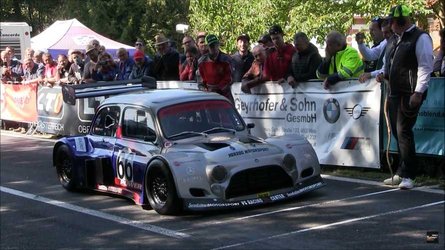 What happens when you stuff two Hayabusa engines in a Fiat 500?