Aka the Endeavour, the body-on-frame SUV is getting ready for the third generation.

It was only recently when our spies caught the next-gen Ford Ranger testing in Europe and now its SUV sibling has been spotted as well. Originally introduced in 2003, the midsize body-on-frame vehicle available in select markets is known as the Endeavour in India and has also spawned a military version for the French army, dubbed the Arquus Trapper VT4.

You can easily tell the new one will once again be heavily related to the Ranger pickup as the two have seemingly identical front fascias and familiar C-shaped daytime running lights. The wheel with six lug nuts is a sign of a rugged vehicle, as is the high ground clearance ensuring the Everest has generous suspension travel.

Much like with the Ranger images, our spies brought to our attention the yellow sticker on the lower corner of the windscreen. That might serve as a clue regarding the electrified nature of the powertrain, namely a plug-in hybrid setup. That said, we can't see the extra fuel cap for the charging port, unless it's obscured by the camouflaged or the test vehicle is a regular hybrid rather than a PHEV.

Even though this right-hand-drive prototype has been spotted on the Old Continent, it doesn't necessarily mean Ford has plans to introduce the next-gen Everest in Europe. It would make more sense to bring it over to the United States where SUVs riding on a ladder frame chassis are more appreciated than on Euro land.

We're hearing Ford wants to sell the new Ranger with a choice of four powertrains, although that will depend on the market. Diesel fans will reportedly get to pick from a twin-turbo 2.0-litre and a beefier 3.0-litre V6, while on the petrol side, there could be a four-cylinder PHEV unit and a twin-turbo 2.7-litre V6. The Ranger Raptor is said to use the latter engine for the US market. 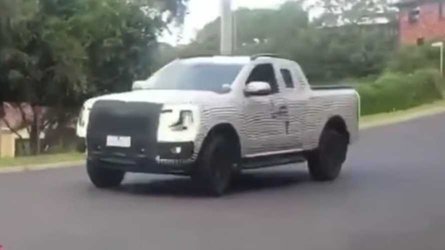 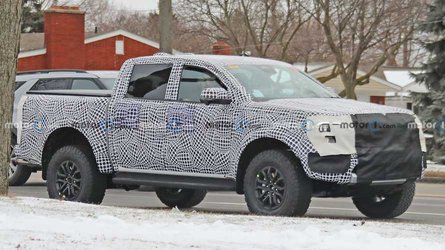 It's too early to say which of these engines will be available in the Everest, but should Ford decide to bring the tough SUV to North America, the twin-turbo 2.7-litre V6 seems like a safe guess. A ten-speed automatic transmission is expected for some of the powertrains, while a choice between RWD and 4WD should still be offered with the next-gen model.

We can't see what's going on inside the cabin, but logic tells us the new Ranger and Everest will use Ford's latest SYNC4 infotainment with either a 12- or 15.5-inch touchscreen. Speaking of tech, the prototype's bulge in the mirrors suggests the vehicle features blind-spot monitoring, and there must be something going on with the door handles if Ford decided to use dual-layer camo.

Mainly developed in Australia, the Ranger and Everest are also important for Volkswagen as the platform will underpin the next-generation Amarok. All three are expected to come out in 2022 and it would be interesting to see a VW equivalent of the Everest, but it's just wishful thinking on our part.