Could this bespoke Ford Transit camper from the UK be any taller?

It actually has an upstairs bedroom.

Anyone can build a bespoke camper van. Toss a sleeping bag in the back and you're good to go, but building a really good home-away-from-home takes skill and imagination. In this case, skill and imagination combine to give this already sizeable Ford Transit an upstairs bungalow. Sure, plenty of campers have a raised roof but this one is permanent. And if you're a purveyor of classic Volkswagen vans, that roof might look familiar.

This custom camper build comes to us from Simply Campervan Conversions and we're seriously impressed. Affectionately called Apollo, the Ford isn't hurting for space and that's before the bespoke roof. This Transit Jumbo offers two living areas with tables, separated by a "rock and roll" converting bench seat that accommodates passengers when in motion and flattens out to a small bed for the kids.

Further back is the kitchen with two small refrigerators and plenty of counter space, not to mention a stove for cooking. A full bathroom is adjacent to the kitchen and a clever dog kennel at the back keeps furry family members safe while travelling.

The party piece is the roof, which comes from a Volkswagen T25. It fits quite well atop the Transit; it's accessible from the front and holds a large double bed for stretching out. Three 100-watt solar panels are fitted outside the roof for power, and heat for both the cabin and water comes from separate diesel heaters. Once the roof was permanently attached the entire exterior was given a matte grey finish, and actually, it's rather refreshing compared to the usual white we see on vans.

Apollo isn't quite done just yet, but it's done enough for a quick vacation. It's entirely built from scratch, using reclaimed materials for some sections and it looks quite comfy inside. The build process is chronicled at the Simply Campervan Conversion YouTube channel, and a new channel called Stearmans on Tour offers a quick video tour (featured above) of the van in its current state. 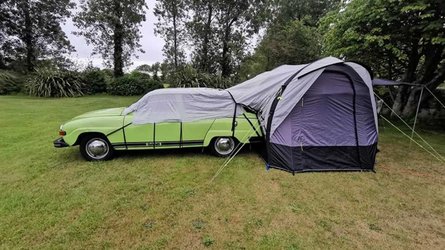 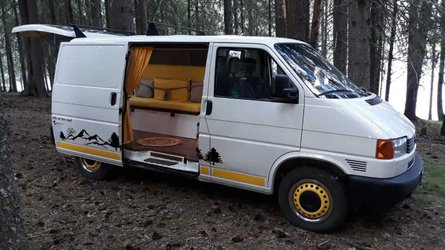 Neat VW Transporter is homemade camper van on a budget

We don't know exactly how high this van reaches, but apparently, it gets all kinds of attention on the road. In the Facebook post embedded earlier we see it fitting beneath the shelter at a fuel station, so presumably it isn't too unwieldy. The build certainly makes great use of the available space, and hey, how many people can say their van has a legit, full-time upstairs bedroom?