Renault Clio with tank tracks is an unusual off-road build

For those of you not living in Europe and South America and not familiar with the Renault Clio, the shortest and simplest description of the car we came up with is that it’s the Ford Fiesta’s competitor from the Boulogne-Billancourt-based firm.

It was launched in 1990 as the successor to the Renault 5 and is also known as the Symbol, Taxi Express, and Lutecia depending on the market. Aside from its performance versions, it’s a humble hatchback with small engines.

The simplest vehicles are sometimes the most enjoyable to drive, and a second-generation Clio received attention from the MasterMilo channel on YouTube. If you’ve watched videos from those crazy folks, you probably know what to expect. If you haven’t, then seeing the small Euro hatch wearing tank tracks will probably shock you. The project started a few weeks ago and now it’s finally moving on its own power and is even (sort of) steering. 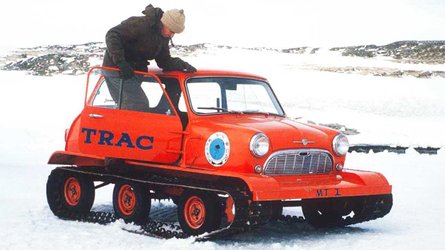 Those tracks are obviously much too heavy for the little engine of the Clio but it seems that the four-cylinder unit is doing just fine despite the white smoke coming out from the exhausts. We can’t tell the same for the clutch though, which is doing its best to send power to the heavy tracks. At some point towards the end of the video, the clutch basically dies and that’s the end of the Clio tank, at least for now.

Reading through the comments, there are some neat ideas for the future of the project. A potato gun on the roof would be a nice addition to the enemy-disrupting fog generator, for example. Someone even suggested it would be cool if we get to see the clutch being disassembled after the backyard terror, though we pretty much know what to expect - a clutch soup. There’s also the remark that the Clio tank smokes as much as the T-55 tank, and we can’t argue with that.