It would likely take us the better half of an hour to count all the 911 derivatives Porsche has planned for the 992 generation of its iconic sports car. Aside from the usual suspects, there are also some absolute novelties being worked on by the Zuffenhausen brand, including a hybrid derivative. However, today, we're not talking about the electrified 911 as our spies have stumbled upon an entirely different 911.

It doesn't have a hybrid powertrain (or at least we don't think it does) but it does have considerably more ground clearance than the typical 911. It's a striking departure from the low-slung sports car we're all familiar with, and yet it's not all that outlandish as Safari-spec flavours of the car have a long tradition. Although such a version on stilts hasn't ever been sold directly by Porsche, the German company is no stranger to an outdoorsy 911.

The new spy shots seemingly confirm that at least one of the two Safari concepts (there was a Macan, too) built in recent years will come to life. Caught testing at the Nürburgring, the prototype has a lifted suspension and slightly modified bumpers for better approach and departure angles. It also appears to have tacked-on wheel arch extensions, which could be a sign of wider tracks at both axles.

An educated guess tells us a Safari-spec 911 would have all-wheel drive, so we won't be too surprised if it'll be based on a Carrera 4S at the very least. As to whether it will be a permanent member of the lineup or a limited-run special edition, it's too early to know. The aftermarket scene has this niche well-covered, and it's increasingly more likely Porsche is looking to grab a piece of the action with its own high-riding 911.

The adventurous 911 has been caught before: 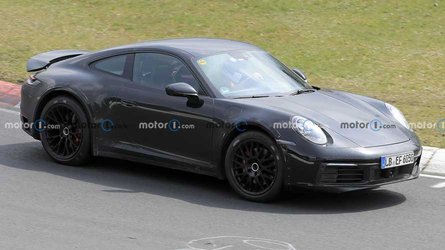 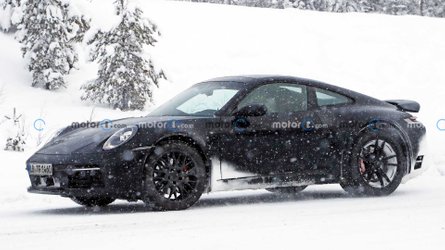 An official debut could take place before the year's end or early 2022 seeing as how the first prototype of this kind was spotted back in October 2020.