Will the disparity hinder EV adoption?

Major metropolitan areas in European countries like France, Spain, and Italy have already implemented low emissions zones to curb pollution. Some already have future diesel and petrol-powered vehicle plans in place as well. Despite extensive legislation on the matter, electric vehicle infrastructure is much further behind.

According to the report, the Netherlands, France, and Germany contain 70 percent of the European Union’s public charging modules. Holland accounts for 66,665 charge points while France boasts 45,751 and Germany reports 44,538. After the three leading nations, the figures take a nosedive with Italy recording 13,073 charging stations and Sweden establishing 10,370 stations to this point. 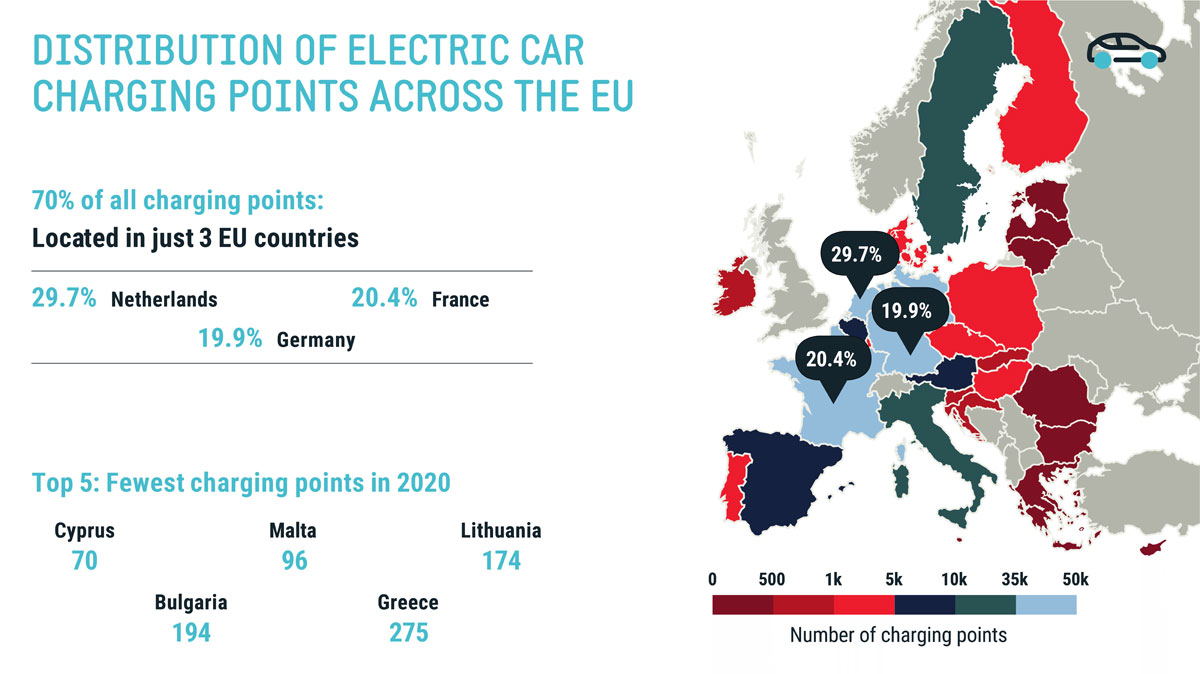 At the other end of the spectrum, neither Cyprus, Malta, Lithuania, Bulgaria, Greece, or Romania eclipses the 500-station mark. ACEA’s study also lays out the economic differences between the EU members. With only .8 percent of the EU’s landmass, the Dutch are responsible for 29.7 percent of the electric charging kiosks. Conversely, Romania comprises 5.8 percent of Europe's total area, but only contributes 493 charging stations (.2 percent) to the 225,000 total.

While Europe’s electric vehicle sales were up by 89 percent in 2020, the unbalanced infrastructure could hinder further adoption. According to ACEA’s calculations, the EU will need to implement 6 million public charging terminals to support its initiative to cut CO2 emissions in half by 2030. Though the study paints a discouraging picture for the EU’s future goals, it captures the wealth disparity among various European nations.

If the EU wants to accelerate EV adoption, it may need to invest in an infrastructure plan that redistributes resources to countries most in need. After all, it's hard to institute a diesel and petrol ban when you don’t have enough electric charging stations to power the future.

The future of charging: