The first photographs of Peugeot's 2022 FIA World Endurance Championship challenger reveal innovative aerodynamics that do away with the need for a conventional rear wing.

The absence of a rear wing on the French manufacturer's new Le Mans Hypercar, christened the 9X8, was described as "a major innovative step" by Jean-Marc Finot, motorsport boss of Peugeot parent company Stellantis.

"We have achieved a degree of aerodynamic efficiency that allows us to do away with this feature," he explained on the launch of the car on Tuesday.

"Don't ask me how, though! We have every intention of keeping that a secret for as long as we possibly can."

Olivier Jansonnie, technical director of the WEC programme at Peugeot Sport near Paris, said: "The new LMH regulations were drawn up to level out the importance of conventional performance-boosting systems.

"The greater flexibility allowed by the sport’s new technical rules regarding aerodynamics permits radical new thinking that favours the emergence of innovative cars, with scope for the design [styling] teams to make an even bigger contribution.

"Peugeot's engineers and designers effectively took advantage of this opportunity to invent new creative processes and break away from established codes to produce a [Le Mans] Hypercar of a completely new genre."

The LMH regulations are less prescriptive than their LMP1 predecessors and instead lay down performance windows, including targets for maximum downforce and minimum drag, into which the cars must fit. 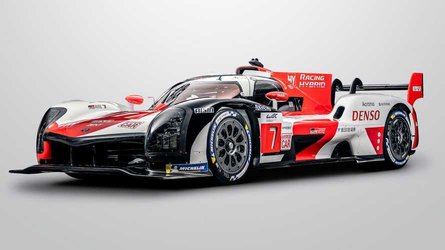 For example, the rear diffuser rules are free, whereas for LMP1 hybrids they stipulated a maximum tunnel height of 150mm. There is also no requirement for a flat floor, save for the mandatory skid plank, which has allowed designers more scope to use the airflow beneath the car to create downforce.

The rules were conceived to allow manufacturers to imbue their LMH machinery with styling cues from their road-going ranges.

Peugeot stated on the reveal of the 9X8 that the car incorporates "unmistakeable Peugeot hallmarks".

"Since the 9X8 is a Peugeot, the original sketch that steered our work portrayed a big cat ready to pounce, a stance which we have suggested by the slightly forward-tilting cockpit," explained design director Matthias Hossann.

“The overall lines of the Peugeot 9X8 express the brand’s styling cues, while its sleek, racy, elegant forms inspire emotion and dynamism.”

Peugeot always made it clear that the nomenclature of its new prototype would begin with a '9' in deference its predecessors. The 'X' is a reference to the car's all-wheel-drive powertrain incorporating a front-axle hybrid system, while the '8' is the last digit of all Peugeot's current street models.

The new 9X8, which is powered by a 2.6-litre twin-turbo V6 and a 200kW front-axle motor-generator unit, is due to begin racing at an undisclosed point over the course of the 2022 WEC season, which will not be determined until after initial testing of the car.

The marque is returning to top-line sportscar racing for the first time since its 908 programme was axed ahead of the rebirth of the WEC in 2012.