The Porsche 911 spawns countless variants throughout each model generation, giving customers plenty of ways to spend their money. Starting later this year, UK customers will have a new choice in the 911 lineup called the GTS. It will sit between the Carrera S and Turbo models, pairing a bit more power than the S with a handful of other performance upgrades.

At the heart of the GTS trim is Porsche’s twin-turbocharged 3.0-litre inline-six engine that produces 473 bhp (353 kilowatts) and 420 pound-feet (569 Newton-metres) of torque. That’s 30 bhp more than the Carrera S and 23 bhp more than the previous 911 GTS. The engine pairs with either the eight-speed dual-clutch (PDK) automatic or the seven-speed manual. Porsche shortened the manual shifter by 10 millimetres (0.39 inches) for quicker shifts.

Porsche will offer the Carrera GTS in both rear- and all-wheel-drive configurations in coupe and cabriolet flavours, though the Targa 4 GTS is only available with AWD. Porsche claims the Carrera 4 GTS can hit 60 miles per hour (96 kilometres per hour) in 3.1 seconds when equipped with the automatic gearbox. Pricing is as follows: 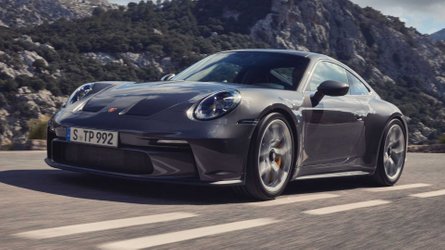 The 911 GTS will stand out from other 911 models with its black or darkened exterior details, effectively wearing the SportDesign package. Visual upgrades include the Satin Black lip spoiler, centre-lock alloy wheels, engine cover grille, and the GTS script on the doors and rear of the car. The Targa 4 GTS receives a darkened Targa bar and lettering. The GTS models also get darkened light surrounds, standard LED headlights with Porsche Dynamic Light System Plus, and darkened rear lights.

Inside the GTS, the GT Sport steering wheel, the Sport Chrono package, and the Porsche Track Precision app are standard, as are the Sport Seats Plus with four-way adjustable lateral support. Race-Tex material covers the seat centres, steering wheel rim, door handles, armrests, gear lever, and storage compartment lid while carbon-fibre trim contrasts it. The 2022 911 GTS also comes with the latest generation of the Porsche Communication Management infotainment system.

The GTS is about more than upgraded looks and more power. Porsche tweaked the suspension, which lowers the ride height by 10 mm, and upgraded its stopping power. The GTS uses the high-performance braking system from the 911 Turbo. Porsche is also offering the GTS the optional Lightweight package that can cut up to 25 kilograms (55 pounds). This is achieved with lighter carbon-fibre bucket seats, lightweight glass, and a lightweight battery. The rear seats are also removed.

On sale now, the first UK deliveries are expected to start later this year.