Good luck staying out of monkey business on this thing.

The 2022 Honda Monkey launched in the UK on 21 June 2021, returning in all its retro radness while sporting a new engine, fifth gear, and improved suspension.

The Monkey has a storied past. Designed as a Japanese theme park attraction, by the late ‘60s the original Monkey (most commonly as the Z50 or Mini Trail) became one of the most popular recreation vehicles in Europe and North America. Its popularity remained steady into the ‘80s before it ultimately gained cult-like status with vintage mini bike enthusiasts, restorers, and customisers.

Honda reintroduced the Monkey in 2018 as a road-legal 125cc motorcycle based on the Grom. Much like its stablemate, the Monkey is lightweight, agile, and absurdly fun. It can serve double-duty as a commuter vehicle and a plaything, while also begging its owner—regardless of mechanical aptitude—to do at least some form of DIY customisation to it.

For the 2022 model year, Honda has given the Monkey the same new Euro-5-compliant, 124cc air-cooled engine that the Grom received. Producing 9.3 bhp and 8.1 ft-lbs. of torque, this new mill has a new intake, reshaped airbox, and revised catalyser. The exhaust muffler has been redesigned, with a new single-chamber design replacing the outgoing three-chamber version. This is said to simultaneously boost performance and create a more appealing exhaust note.

Riders will appreciate Honda’s inclusion of a new five-speed gearbox, a nice step up from the previous four-speed. The gear ratio is also lower overall, so longer rides at higher speeds will be a little less buzzy. Speaking of longer rides, Honda claims the Monkey’s fuel economy is a very impressive 1.5 litres per 100 km (188 mpg-UK); meanwhile, top speed is a claimed 56 mph (91 km/h).

The twin rear shocks now come with two-stage springs and revised damper rubbers, with the aim of smoothing out bumpy rides and preventing the rear suspension from bottoming out. Travel is 102 mm front and back, while ground clearance is 175 mm. The ABS braking system features a single 220 mm front disc at the front and a 190 mm version out back, on 12-inch wheels.

The 2022 Honda Monkey comes with an RRP of £3,899, and will be available in Pearl Glittering Blue, Banana Yellow, and Pearl Nebula Red. Bikes should hit dealership floors in August of 2021. 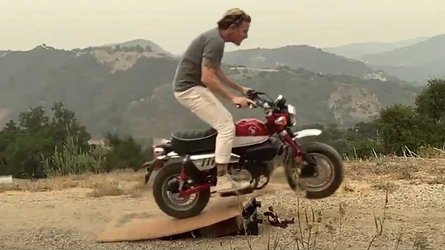