The chase took police from the busy highway to narrow neighbourhood streets.

Harrowing video from the US captured a stunning police chase by Ohio Highway Patrol through Summit County on Wednesday when a 24-year-old man stole an motorhome. The video shows the RV flying down the highway before exiting onto surface streets, weaving past other motorists and through thick traffic in an attempt to evade authorities. However, as the video shows, the several officers in hot pursuit weren’t going to let the motorhome get away.

The video captures the vehicle, with the slide-out portions still extended and an extension cord dangling behind it, weaving through traffic at a high rate of speed and driving into oncoming cars with no regard for traffic laws. As the video progresses, the roads get narrower as the man cuts through commercial zones before attempting to lose police on narrow residential and subdivision streets. Running out of places to go, the man drives the motorhome through back gardens with the police right behind him. 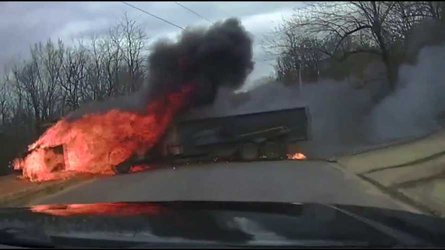 Police dashcam catches flaming van making a break for it
⠀ 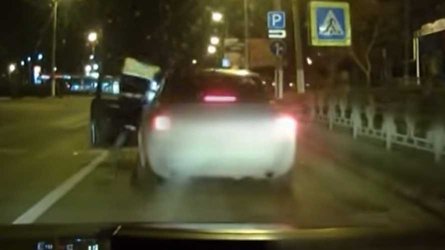 The chase ends with the man, Randy Schiffbauer, driving the motorhome into a garden, nearly hitting a woman before he abandons the vehicle, according to Fox 8. Police quickly apprehended him thanks to a canine unit. Police attempted the PIT manoeuvre several times during the chase, damaging the motorhome’s rear but failing to stop the pursuit. The chase started when the Summit County Sheriff’s Office received a call about a man attempting to break into vehicles in Green, Ohio. Police arrived just as the man sped away in the motorhome.

Surprisingly, This isn’t Schiffbauer’s first go-around with authorities or large vehicles. In 2019, he stole a bulldozer from a local construction site. According to Fox 8, he took it to the streets of Akron, Ohio, destroying cars before attempting to demolish a house. Police are holding the man on several charges, including felonious assault. Thankfully, there are no news reports of anyone seriously hurt in the chase.