The new Golf R is more powerful than the outgoing model, but it’s heavier, too.

The eighth-generation Volkswagen Golf didn’t take the iconic hatchback in a new design direction. Instead, the automaker tweaked the looks while focusing on refining the final product, which is best observed in the Golf R Mk8. The familiar sheetmetal may make it seem like a warmed-over evolution of the Mk7.5, but there are distinct differences under the sheetmetal that are put on display in the latest Carwow drag race video.

Both Golf R models sport turbocharged 2.0-litre four-cylinder engines paired to seven-speed dual-clutch automatic gearboxes with launch control, but the Mk8 makes more power. It produces 320 bhp (238 kilowatts) and 420 Newton-metres (309 pound-feet) of torque, while the Mk7.5 makes 300 bhp (223 kW) and 400 Nm (295 lb-lt). Both have all-wheel drive, though the Mk8 has the more advanced system to put the power to the ground better.

The Mk8 weighs a tad more than the Mk7.5 – 1,551 kilograms (3,419 pounds) to 1483 kg (3,269 pounds), respectively. However, that weight difference isn’t enough to help the Mk7.5 overcome its performance disadvantages. All four drag races, which include two rolling starts, see the Mk8 beat the Mk7.5. Even when the Mk8 gave the Mk7.5 a half-second start, the Mk8 still passed it long before crossing the finish line. The Mk8 completed the quarter-mile in 12.3 seconds, or 12.8 with the half-second delay, while it took the MK7.5 13.1 seconds to complete it.

Get up to speed on the latest Golf R news: 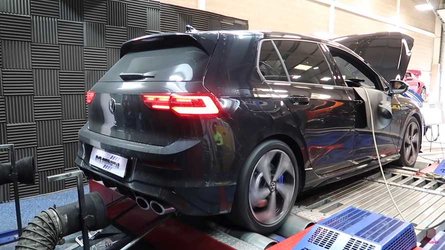 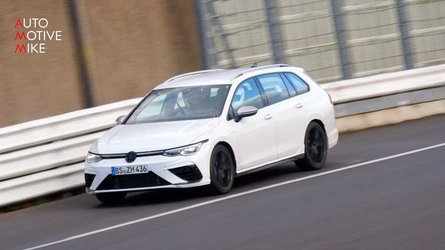 The Mk7.5 does surpass the Mk8 in one area – braking. Its lighter weight and bigger tires gave it the advantage in this challenge, though the Mk8 is the superior performance machine, even if it doesn’t look all that different. Small tweaks to the powertrain can have substantial real-world effects. The video should push those on the fence about getting the new Mk8 into the driver’s seat of the new VW. It’s just better.