Setting up for another lap record?

Along with being one of the most demanding race tracks on earth, the Nurburgring Nordschleife is a fantastic place for manufacturers to test new vehicles. CarSpyMedia recently caught a lightly camouflaged Mercedes-AMG GT 73e firing around the track.

As the AMG vehicle is fairly deep into its development cycle, it’s unclear if the German automaker is doing more validation testing or preparing for another lap record attempt – we’ve already seen the vehicle officially unveiled next to the AMG Project One and Mercedes’ 2021 Formula 1 race car. Either way, it’s clear that the F1-inspired hybrid system makes this quite a rocket.

Nothing has been confirmed, but the GT 73e is expected to have a twin-turbo 4.0-litre V8 engine supported by a performance hybrid system. Put together, the joint-strike force of internal combustion and electricity will pump out around 804 bhp (600 kilowatts) and 738 pound-feet (1,001 Newton-metres) of torque. To offer some perspective, the GT 63 S can only cough up 630 bhp (470 kW).

While the non-hybrid variant does have considerably less power, it’s still a potent machine. Late last year, it claimed a new Nurburgring lap record in the luxury four-door class – putting down a time of 7 minutes 23.009 seconds. However, to make things extra confusing, the fastest four-door vehicle around the circuit is actually the Jaguar XE Project 8, which set a time of 7 minutes 18.361 seconds. 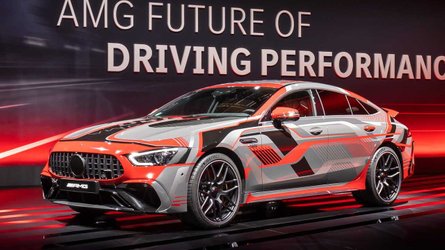 Mercedes-AMG E Performance is the future for GT 4-door, C-Class
⠀ 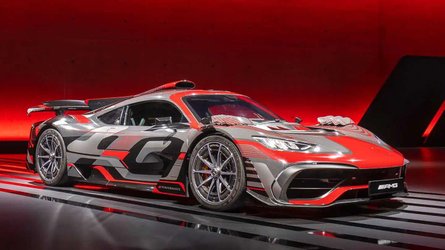 AMG hybrids will recharge the battery while you’re drifting

We’re curious to see if the extra power will be able to counteract the added weight of the hybrid system in the GT 73e. Does Mercedes wants to compete with the XE Project 8 or just improve on the previous time set by the GT 63s?