Even the Bugatti Baby II is highly bespoke

Inspiring a new generation of young (and wealthy) Bugatti enthusiasts.

Less than a year after it was unveiled as a production model, the Bugatti Baby II is now reaching its first owners around the globe. The French manufacturer will assemble just 500 examples of the electrically-driven toy car and just like the real Bugatti supercars, the Baby II offers numerous customisation options. We’ll get to that in a minute.

Bugatti says one of the very first produced Baby II examples has arrived at a long-time Bugatti-owner in Dubai. A highly personalised car has been delivered to an operator of a private jet terminal in the UAE, who ordered the mid-level Vitesse version with a full carbon fibre body and a 2.8-kWh battery. The car will be used for private transfers to VIP sections of the Al Maktoum International Airport.

Another Baby II has been delivered to a private Bugatti collector from Belgium, where it's joined a Bugatti Type 35 A, an original first-gen Bugatti Baby, and several other pre-WWII Bugattis. This example of the scaled-down Bugatti is from the range-topping Pur Sang model and comes with hand-formed aluminium bodywork. Interestingly, the collector bid on chassis 388 to match the original Bugatti Baby in their collection.

Boys never grow up, their toys just get bigger: 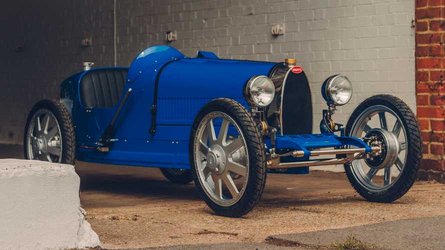 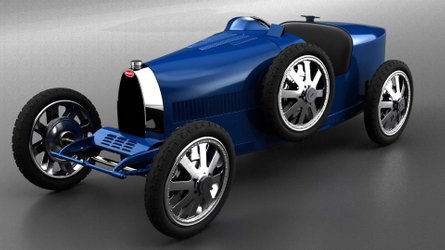 The Baby II should be categorised as an official Bugatti model, the company says, which means it benefits from the brand's customisation and ownership bonuses beyond just the driving experience. Virtually countless colour and interior combinations are available and every Baby II owner receives automatic membership to the so-called The Little Car Club. It allows owners to drive their small cars on renowned tracks around the world in special events. The car comes with a 12-month factory warranty and lifetime support.