Volkswagen T7 Multivan new teaser is all about the nifty table

The table can double as a centre console.

MPVs are not the most exciting vehicles, but when it comes to practicality, nothing beats the Multivan and the like. The all-new T7 is right around the corner, with Volkswagen Commercial Vehicles planning to introduce the next generation in about a month from now. Meanwhile, a new episode of the lengthy teaser campaign puts the spotlight on the multi-function table.

I know what some of you must be thinking right now: What is there to say about an in-car table? Well, the one fitted to the new Multivan has a few aces up its sleeve. Thanks to a completely flat floor from the first row of seats all the way back to the third row, a newly developed track system has been installed so that the table can be moved from front to rear.

It also doubles as a centre console for all three rows and can be raised up by pressing a button. When not in use, its fold-out halves along with the height adjuster are retracted to maximise interior space. Speaking of freeing up the cabin, it's also possible to remove the table altogether whenever you want to carry longer items to create more space between the seats.

VW Commercial Vehicles also mentions headroom has remained the same compared to the outgoing T6.1, but if the optional panoramic sunroof – a first for the Multivan – is added, headroom is improved over its predecessor. It likely has to do with the T7's switch to the MQB platform, bringing skin-deep changes and better packaging along with a more car-like driving experience and the latest tech seen in VW's compact to midsize cars.

The revamped MPV will be wider than its predecessor to increase interior space, further improved by stretching the wheelbase. Replacing the old-school handbrake lever with an electronic switch and swapping out the manual gearbox for a tiny shift-by-wire DSG control has created more room between the front seats.

When it debuts mid-June, the T7-based Multivan/Bulli will have a plug-in hybrid powertrain and we're expecting some of the hardware to be adapted from the Golf Mk8. 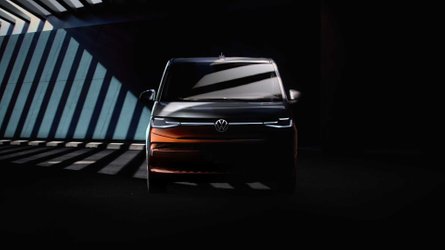 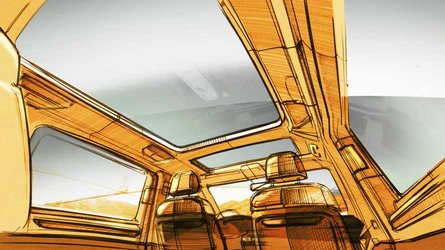