That's quite a reduction compared with its £66,000 predecessor.

The new Toyota Mirai hydrogen-powered saloon car has gone on sale in the UK with prices starting at less than £50,000. That’s a huge drop in price for the high-tech fuel cell family car, which cost around £66,000 when it was first launched around five years ago.

Now in its second generation, the Mirai offers a new and improved hydrogen fuel cell propulsion system, which effectively uses hydrogen to power the electric motor. That means the car can be filled with hydrogen in much the same way you fill a car with petrol or diesel, but it drives like an electric car and the only tailpipe emission is water vapour.

According to Toyota, the new fuel cell powertrain weighs almost half as much as the original system, and the use of Toyota’s GA-L vehicle architecture has allowed “significant improvements” to be made to the car’s aerodynamic and handling properties. Toyota has also added a third fuel tank, increasing the range by around 30 percent to 400 miles.

The Japanese car maker is offering the new-look Mirai in a choice of three trim levels, with the £49,995 starting price buying you the entry-level Design model. That comes with 19-inch alloy wheels, two-zone climate control and satellite navigation. You get heated front seats and a JBL sound system, too, not to mention a reversing camera, the Android Auto and Apple CarPlay smartphone integration systems and a fleet of safety gadgets.

Moving up the range takes you to the Design Plus Pack, which adds leather upholstery, front and rear parking sensors and a reverse tilt function for the door mirrors. Some other safety gadgets also come with the upgrade, but the price rises by £4,000 to £53,995.

The range is crowned by the Design Premium Pack, which costs a hefty £64,995 and comes with a wealth of extra features in exchange. You get 20-inch alloy wheels, for example, as well as heated rear seats, more upmarket leather upholstery and ventilated front seats. This high-spec variant also comes with a panoramic glass roof and a black ‘two-tone’ roof colour scheme.

Inside, the car is further marked out by its full colour head-up display and power-adjustable heated steering wheel with a memory function for the position. Three-zone climate control is also thrown in as standard, plus Toyota’s Teammate Advanced Park system, which will park the car for you.

Toyota is already taking orders for the new Mirai, which comes with business contract hire rates from £435 per month plus VAT.

More on the new Toyota Mirai: 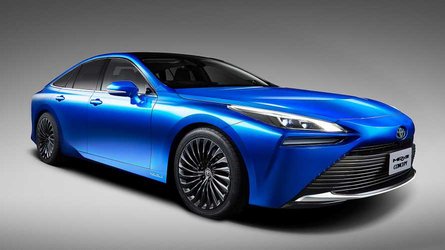 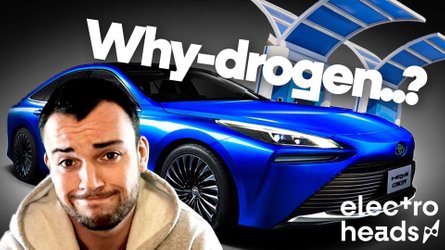 Is hydrogen the automotive future that never becomes present?