Watch Mercedes-AMG One attack corners of Nurburgring in spy video

Just a few weeks ago, our spy photographers spotted the Project One having a field day at the Nurburgring. There was just one problem, though – those were just still images and we would love to see the hypercar lap Green Hell in its latest development.

Looks like our prayers have been answered as the very same AMG One prototype is the subject of this spy video from CarSpyMedia on YouTube (embedded above). That was pretty made obvious by the license plates from the spy photos below and the one seen above.

Despite already getting showcased in a red, gray, and black paintwork last month, the prototype spotted at the 'Ring still wears the typical black and white camouflage. That doesn't affect its brute performance as seen on video. You'll pretty much endow yourself with aural pleasure as the Mercedes hypercar scream at every acceleration, and it's a hoot to watch the AMG One attack corners like they were straights.

Looking closely, you'll notice that there was a slight drizzle when the wide hypercar was testing, but that didn't deter its test driver from going flat out at the famous track. 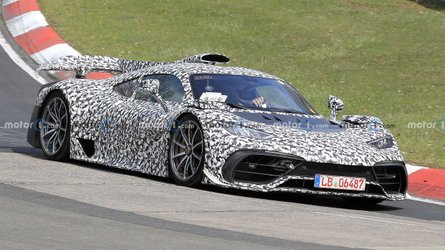 Mercedes-AMG One spied in its natural Nurburgring environment 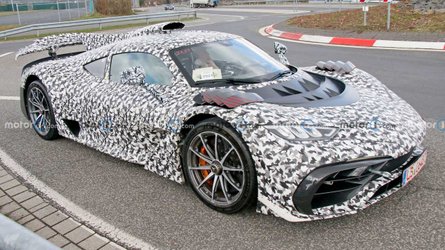 Mercedes-AMG One spied in detail in new photos

The anticipation for the AMG One has been around since 2017 when Mercedes revealed it as a concept. Among the many things it boasts is the integration of F1 technology into the hypercar, including its hybrid system.

More importantly, the road-legal AMG One is expected to produce over 1,000 bhp from an ensemble of four electric motors and its small 1.6-litre V6 engine. Of note, this power plant is derived from the Mercedes F1 W06 Hybrid race car and capable of screaming up to 11,000 rpm.