This sure is an odd place to find some minced meat.

Angry at electric cars? Over in Germany, every now and then graffiti is seen on charging stations. But how does one come up with the idea of ​​smearing minced meat on the plugs and seriously damaging a column with it? The Munich local newspaper AZ is now reporting on the incident.

According to the report, some unknown individuals damaged a charging station in Marklandstrasse in Fasangarten, a southern suburb of Munich, with minced meat in such a way that the moist meat penetrated to the contacts. That may have led to a short circuit, we suspect. In any case, a quick repair was not possible. 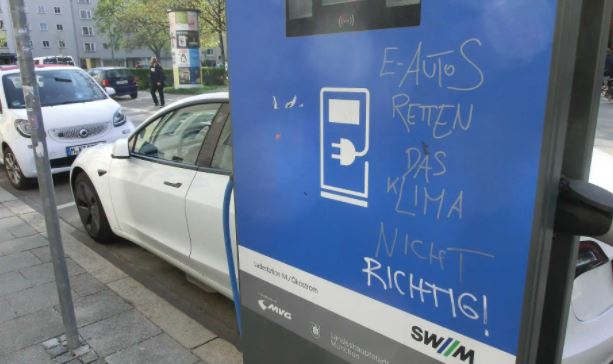 Damaged or even destroyed charging stations are not uncommon in Munich. In 15 percent of the cases, they are due to vandalism. Overall, the "disruption rate" of the pillars in Munich is less than three percent. On the national average, on the other hand, around every sixth column is defective, i.e. around 17 percent.

Many drivers of diesel or petrol cars are annoyed by the political preference for electric cars. The high subsidies for e-cars are likely to be a particular thorn in the side of fossil fans. After all, the government pays no less than 6,000 euros when you buy an EV. In addition, there is the manufacturer's share, which means that the subsidy amounts to 9,750 euros.

The fact that electric cars are sometimes reported more often in the media than combustion models, and that electric cars generally have a better image, might also bother fanboys of the combustion engine. A web search in Germany, however, reveals little of this anger. We only found one article in the "Neue Westfälische"  (NW) from 2019. It was about a video often shared on Facebook by the astrophysicist Harald Lesch, in which he reports relatively objectively about the problems in the extraction of the battery raw material lithium:

According to the newspaper report, however, the video became the focal point for the hatred of the electric car on social media:

"It is interesting how this development is discussed in the social networks. For weeks, a bizarre protest movement has been developing, especially on Facebook, which mixes meaningful scientific findings with hysterical fear of loss. And the electric car has become a symbol of all evil."

As a driver of a diesel or petrol car, do you really have to get angry about electric cars? We think it's not necessary. One can be of the opinion that a scrapping bonus like the one from 2009  would be more appropriate to protect the environment. One can also believe that electric cars are not as environmentally friendly as they are often claimed, but damaging other people's cars as a result, as seen recently in a video from the USA, or destroying charging stations - in our opinion that's way over the line.