Ford lines up its two most powerful EVs.

Ford is getting serious about electrification. To show what's possible, the company is building high-powered one-offs like the Mustang Mach-E 1400 and Cobra Jet 1400. The company gets NASCAR racer Joey Logano and NHRA Funny Car driver Bob Tasca III to race them on the drag strip in this video.

It has a setup for lapping the track, including Brembo brakes with a hydraulic handbrake. The drivetrain is adjustable for balancing the power between the front and rear. Different control arms and steering setups also allow for turning things.

Meanwhile, the Mustang Cobra Jet 1400 is specifically for covering the quarter-mile. It also makes 1,400 bhp and has 1,100 pound-feet (1,491 Newton-metres) of torque. All of the power goes to the rear wheels.

Ford's official specs say the Cobra Jet 1400 can cover the quarter-mile with low-eight-second times at over 170 miles per hour (274 kilometres per hour). In the first race in this video, the electric Mustang drag racer covers the quarter-mile in 8.47 seconds at 167.95 mph (270.3 kph). 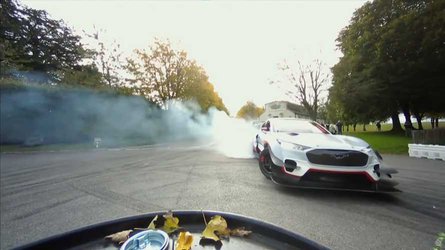 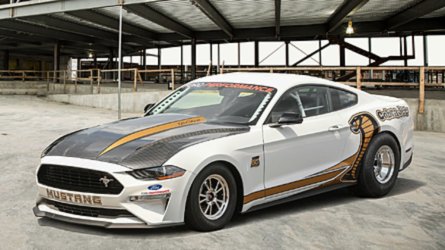 Logano jumps the start in the first race, so the guys run things a second time. The Mach-E 1400 takes the lead off the line, likely because of its all-wheel-drive layout. Once the Cobra Jet 1400 gains traction, it rockets ahead.