The next-generation Mercedes GLC-Class will share its underpinnings with the 2022 C-Class. However, that’s not all the two will have in common. The new C-Class sports an S-Class-like interior with two large screens, and it appears the GLC will follow suit. A new spy video provides a brief glimpse of the camouflaged interior, revealing a digital instrument cluster and a large screen that sits low on the instrument panel.

The revamped layout replaces the conventional-looking instrument cluster with a flat screen, while the dashboard-mounted infotainment display disappears for an in-dash unit. The video shows the driver quickly covering up the interior as the camera approaches, hiding any other details, though it should be quite similar in design to the interior offered in the new C-Class. Both vehicles ride on the company’s Modular Rear Architecture, which should help lower the vehicle’s weight while sporting a higher torsional rigidity over the outgoing model.

The new platform will allow Mercedes to offer a range of powertrains, including petrol and diesel ones, though it’ll adopt a slew of four-cylinders to provide oomph, just like the C-Class. The new platform will allow the automaker to add electrification, so customers should expect mild-hybrid and plug-in setups. Even the hotter AMG variant will adopt a four-cylinder engine.

Check out the other spy shots: 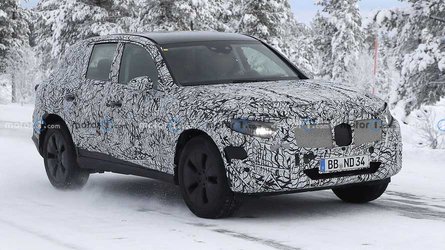 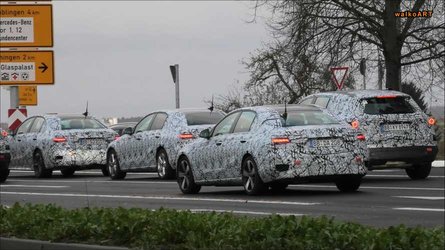 Next Mercedes C-Class spotted testing with its GLC SUV buddy

The test vehicle in the video continues to wear thick camouflage, false panels, and stand-in lighting units. The next-gen GLC looks to ride lower than the current-gen model, which is likely due to the new platform, though we don’t expect Mercedes to drastically alter the crossover’s proportions, even if it looks a bit bigger. If other recent Mercedes reveals are any indication, we doubt the overall styling will change much. The company has taken a reserved approach to re-designing its models. We don’t expect Mercedes to reveal the new GLC until late in 2021 or early 2022.