Study: Half of all new light vehicles will be electrified by 2026

The main pillars of EV sales growth are expected to be Europe and China, the US to a lesser extent.

Electrified powertrains are taking over automakers’ engine lineups. The most basic form is the mild hybrid, which will end up being the most popular in the short term, but there are also actual hybrids, plug-in hybrids, range extenders and pure-electric vehicles. All of them are becoming more and more common and a new study predicts they will account for half of all vehicles sold around the world by 2026.

The study was put together by the Boston Consulting Group (BCG), a global management consulting firm, considered to be one of the most prestigious in the world. BCG expects that vehicles with zero tailpipe emissions will become the dominant type of powertrain in the industry, when it comes to light vehicle sales only after the year 2035, but that electrified will reach that point around 10 years sooner. 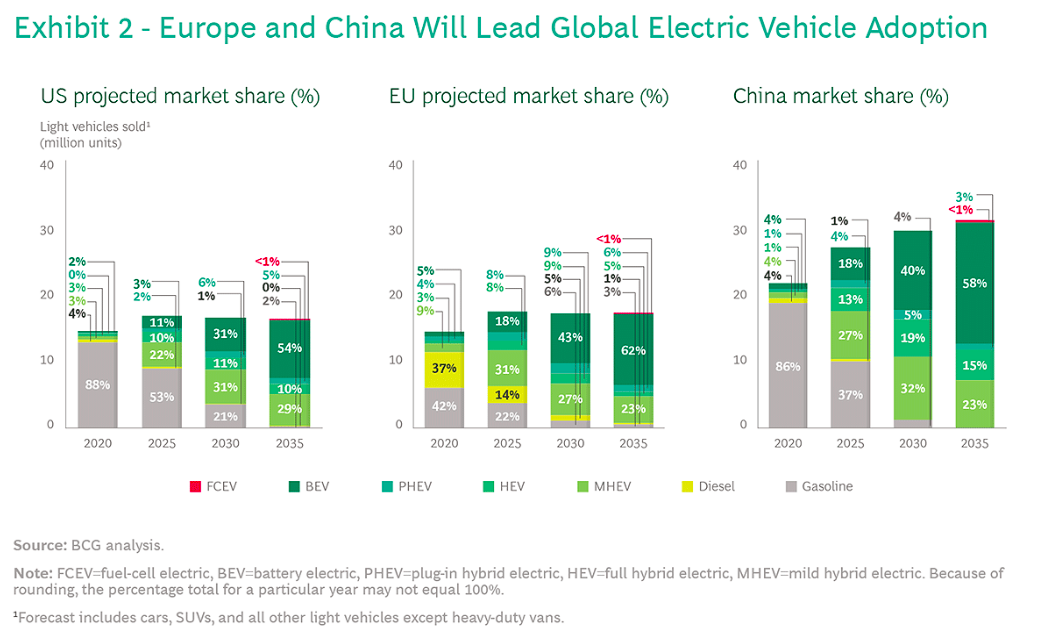 It also says the shift towards fully-electric vehicles will happen in three distinct phases: the phase we’re currently in, when EV sales are heavily driven by incentives, then we will move to a phase when cost of ownership will become the main draw, before a third phase where the supply of new models will drive the push for electrification.

The study states that

We expect that market leadership will be divided among a more even mix of new EV-only players and incumbent OEMs, and be determined by how well the companies manage their portfolios across regions and scale up their production, distribution, and services.

BCG estimates that there will be over 300 BEV and PHEV vehicles on the market by 2023. In that same year, full and mild hybrids will account for 25 percent of all global light vehicle sales, according to the source article published on Automotive News.

Another important year mentioned by BCG is 2030, the year when it projects that the cost of batteries will have dropped enough to make electric models affordable without government incentives.