Tesla reveals how often its cars burn from fire

In the US the average is one fire for every 205 million miles travelled.

Tesla's Vehicle Fire Data provided for the period 2012-2020 reveals that there has been about one vehicle fire for every 205 million miles travelled.

That's over 10-times higher than the average distance between fires than in the case of the national average of 19 million miles in the U.S., according to the National Fire Protection Association (NFPA) and U.S. Department of Transportation. However, we must remember that because of the growing production and sales, most of the Tesla cars are new, much younger than the U.S. average.

Both numbers include "instances of vehicle fires caused by structure fires, arson, and other things unrelated to the vehicle," which means that the actual average distance between fires caused by the vehicle itself is even better.

In order to provide an apt comparison to NFPA data, Tesla’s data set includes instances of vehicle fires caused by structure fires, arson, and other things unrelated to the vehicle, which account for some of the Tesla vehicle fires over this time period" 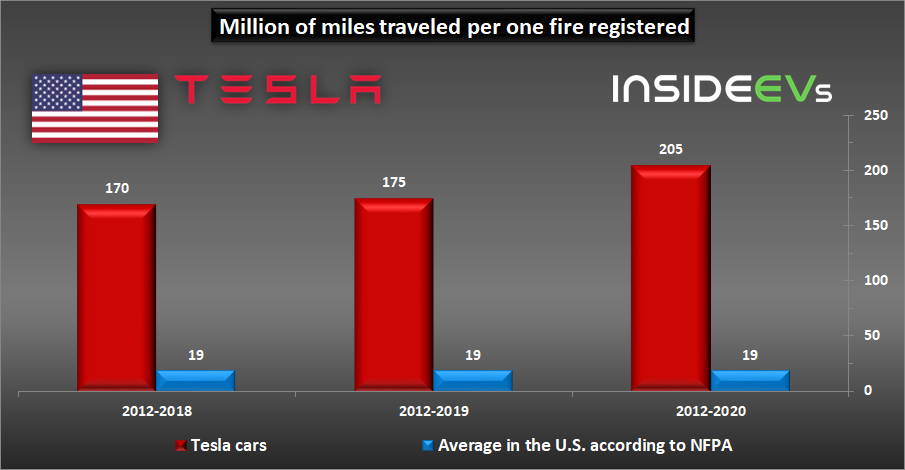 The data is too brief to allow us to draw any conclusions, especially since multiple factors can affect the final number. For example, high sales of Model 3/Y in recent years has highly decreased the average age of the cars, which alone could increase the number of miles per fire instance.

Anyway, it's great to see that Tesla's electric cars are significantly better than the industry average. We guess that electric cars in general will catch fire less often than in the case of conventional cars.