It's the first car to wear the updated lion badge.

After eight years on the market and several facelifts, the second-generation Peugeot 308 is being retired. Its successor has been well worth the wait, and while beauty may be in the eye of the beholder, we're finding the revamped to be more visually appealing than its ageing predecessor. Completely redesigned, the VW Golf rival looks all-new while paying tribute to the past with a retro badge and the "308" logo below the bonnet.

It finally gets the lion's fangs made from LED daytime running lights extending down the front bumper, thus bringing the 308 in line with recent Peugeot products. The front grille takes after recently updated SUVs such as the 3008 and 5008 and is flanked by slim matrix LED headlights for the GT and GT Pack versions. The lesser trim levels have slightly larger headlights and light-emitting diodes for only some of the lighting functions.

The lion is sharpening up its three claws at the back for the full-LED taillights, joined by a glossy black piece of trim stretching across the tailgate but without incorporating a light strip as seen in many new cars. Olivine Green and Vertigo Blue are the hues featured here, but customers will also be able to get the new 308 in Elixir Red, White Banquise Grey, Pearl White, Black Perla Nera, and Artense (silver). A variety of 16- to 18-inch wheels are available.

Open the doors and you might be tempted to say you're about to enter the cabin of a concept car. Peugeot is known for its avant-garde dashboards and the overhauled 308 is no exception. The more expensive versions get a 10-inch digital driver's display accompanied by a central touchscreen of the same size that comes as standard.

The HVAC controls are easily accessible using a touch-sensitive key, joined by other shortcut buttons positioned below the main screen. You still get some physical toggle switches right below, but as with other brands, Peugeot has integrated most of the functions in the infotainment to clean up the centre console.

From a wireless charging pad and eight-colour LED ambient lighting to a 10-speaker Focal sound system and electrically adjustable seats, the interior has all the goodies you'd expect from a compact hatchback with premium aspirations. There's even a Clean Cabin function that filters polluting gases and particles while showing the air quality on the main display.

Riding on an evolution of the EMP2 platform, the next-generation Peugeot 308 will be powered by a turbocharged three-cylinder engine offered in two states of tune. The 1.2-litre petrol unit develops 108 and 128 bhp sent to the wheels via a six-speed manual or an optional eight-speed automatic transmission for the more powerful version. On the diesel side, a four-cylinder 1.5-litre is rated at 128 bhp and comes with either two or three pedals.

At launch, there will also be two plug-in hybrid, front-wheel-drive models with an eight-speed automatic, a 12.4-kWh battery pack, and an electric motor producing 81 kW in both cases. The difference between the two will be the petrol engine, developing 148 bhp (110 kW) in the lesser configuration and 178 bhp (132 kW) for the more powerful version. Combined output stands at 178 bhp and 222 bhp, respectively, with both offering a WLTP-certified electric range of around 37 miles (60 kilometres).

Produced in France at Stellantis' Mulhouse factory, the new Peugeot 308 will go on sale in Europe in the second half of the year. Recent spy shots have revealed a more practical estate is also planned to take on the Golf Variant.

The estate is not far behind: 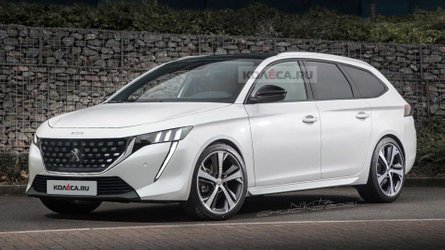 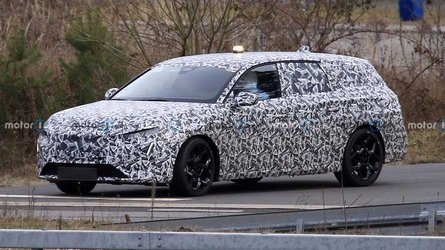