Catalytic converter thefts have skyrocketed across the US over the last year. In Los Angeles, the county sheriff’s department saw reports of thefts soar 400 percent between 2019 and 2020. Efforts to stop the thieves led to a massive bust for the department earlier this week. The LA County Sheriff’s department executed search warrants against four different locations resulting in the arrest of 19 people.

The bust also recovered 250 catalytic converters with an estimated value at around $750,000 (approx. £540,000), according to the Santa Clarita Sheriff’s Station, which is part of the LASD. The bust was tied to thefts in the Santa Clarita Valley and other local areas, and the effort was led by the station’s Crime Impact Team. Deputies also seized $100,000 and one “ghost” handgun. Catalytic converters have become lucrative targets for thieves because of the high concentration of precious metals used inside of them.

A February report noted that some metals like palladium are valued at $2,500 (£1,800) to $3,000 (£2,200) while rhodium is fetching over $20,000 (£14,350) an ounce. Thieves have been targeting vehicles like the Toyota Prius. It’s hybrid powertrain means the catalytic converters are in better condition because the petrol engine doesn’t operate all the time. Large vehicles like the Ford F-250 are also targets because they often have larger catalytic converters, which hold more precious metals.

It’s a big problem in the UK too: 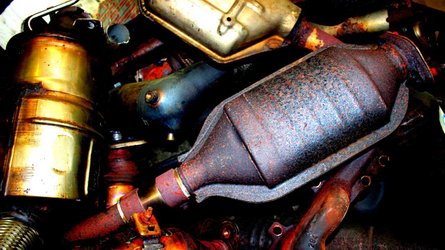 UK cities where catalytic converter theft is most common

The department says that the investigation is ongoing, and it is encouraging any recent victims to contact the station’s detective bureau. The department is also asking residents to park in well-lit areas with surveillance cameras, weld catalytic converter bolts, engrave the vehicle’s VIN into the converter, and report any suspicious activity to help curb the thefts. California is already requiring businesses to take photos or videos of anyone trying to sell catalytic converters, while also keeping a record of their ID information.