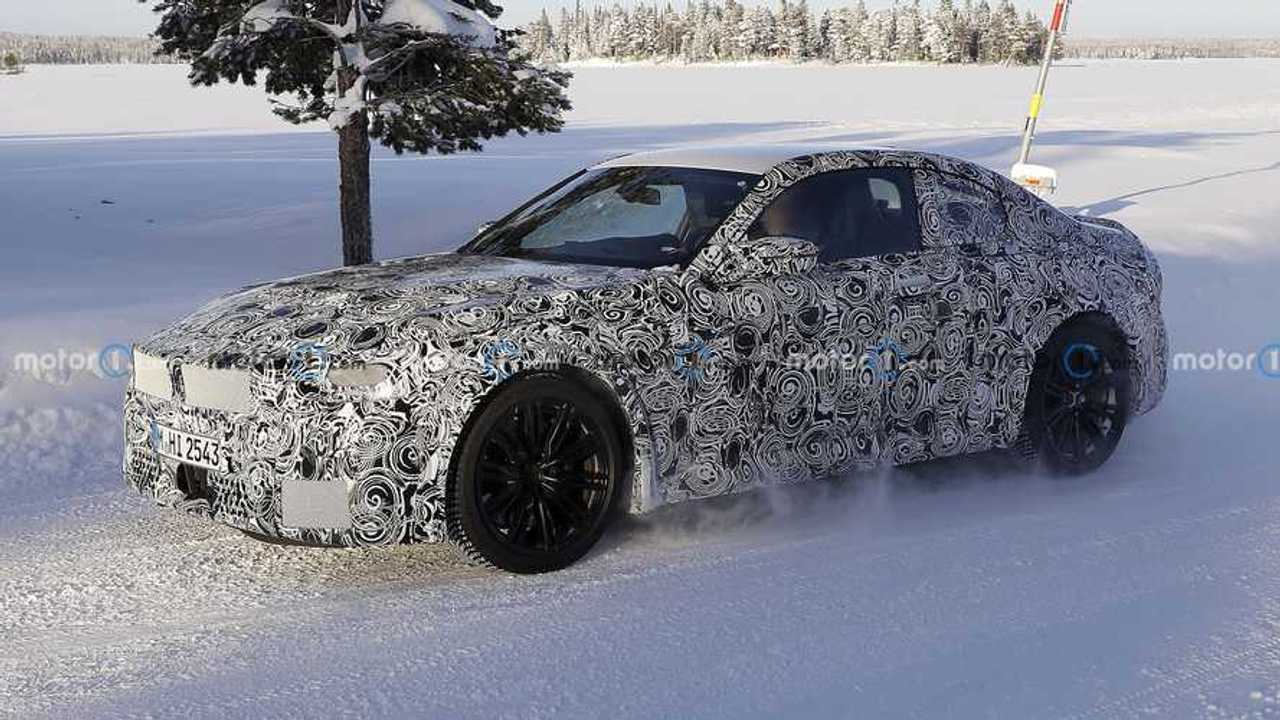 Fear not, BMW faithful. This still has RWD proportions.

While we’ve seen our fair share of spy shots with the next-generation BMW 2 Series Coupe, this is our first proper look at the M2. Caught testing in a wintry scenery somewhere in northern Europe, the smallest of the full-fat M cars (the M135i doesn’t count) had the full production body and the signature quad exhaust setup.

After the upcoming 4 Series Gran Coupe and electric i4, the new 2 Series / M2 will be the next models in line to get BMW’s redesigned door handle that remains flush with the bodywork. The Bavarians slapped on some white stickers above the actual door handle to try and trick us into believing the prototype had the old setup, but we know better. We also see an extra layer of disguise at the base of the C-pillar – notice the tiny black rivets holding the fake panels - presumably to hide the redesigned Hofmeister kink.

Even though all models below the 3 Series have been demoted to a front-wheel-drive layout, the two-door 2 Series will remain the exception. It still exhibits the traditional RWD proportions with a long bonnet and a short rear, and many are hoping the hugely controversial front grille of the bigger M4 isn’t hiding behind that mesh. By the looks of it, it isn’t, but considering BMW’s recent bold design approach, we can’t be sure.

A subtle boot lid spoiler further denotes this isn’t a run-of-the-mill 2 Series model, while the chunky brakes and typical M side mirrors are also telltale signs we’re dealing with the range-topper. Those appear to be the final headlights, which we might have seen already almost a year ago when an early pre-production prototype of the normal 2 Series was spied camo-free. The taillights also appear to be the final setup.

All we can do is speculate at this point regarding the engine, but logic tells us it will employ a detuned version of the twin-turbo 3.0-litre used in the M3 and M4 along with their X3 M and X4 M SUV counterparts. Codenamed S58, the inline-six puts out 473 bhp and 406 pound-feet (550 Newton-metres) of torque in the non-Competition models, and we think it will be dialled down for the M2 to avoid clashing with the M4.

We’re sure many would be happy with the 444 bhp offered by the current M2 CS, but even if that won’t be the case, BMW will likely bump the output to beyond the 404 bhp available in the M2 Competition. Remember when this generation of the M2 had “only” 365 bhp? A report published by Autocar a year ago claimed the high-performance coupe would get at least 420 bhp in what is expected to be a larger and heavier car compared to its predecessor.

While the standard next-generation BMW 2 Series Coupe (G42) is expected to debut in the following months and go on sale for the 2022 model year, the M2 version (G87) will likely be launched next year as a 2023MY.