The new, high-performance VW Tiguan R has gone on sale in the UK with prices starting at just under £46,000. Based on the latest-generation Tiguan, the new model comes with a 316 bhp 2-litre petrol engine, four-wheel drive and the ability to get from a standstill to 62 mph in under five seconds.

In essence, the Tiguan R uses the same turbocharged engine as the Golf R, but the extra weight and drag of the SUV body leave it with slightly less performance. Still, a 0-62 mph time of 4.9 seconds and a 155 mph top speed is quick in anyone’s book.

As well as all that performance, the Tiguan R also comes with adaptive chassis control (DCC) as standard, and it rides 10 mm lower than any other Tiguan. Individually adapted shock absorbers and the DCC are designed to work together to provide “optimum driving dynamics”.

Standard features also include 21-inch ‘Estoril’ alloy wheels and an 18-inch performance braking system, marked out by blue-painted callipers adorned with the ‘R’ logo on the front units. The car is also distinguished by its aggressive front and rear bumpers, as well as the four tailpipes that sit alongside the black rear diffuser.

Inside, the Tiguan R gets the same blue-black cloth-upholstered sports seats as the Golf R, while the driver holds a heated ‘R’ sports steering wheel. There’s also a dedicated R button on the wheel, which allows the driver to switch between the Tiguan’s seven drive modes without taking their hands off the wheel.

That isn’t the only high-tech feature, though, with all the features of a Tiguan R-Line appearing alongside some R-specific additions. That means you get LED headlights, a digital cockpit and keyless entry, as well as a rear-view camera, a heated steering wheel and heated front seats. 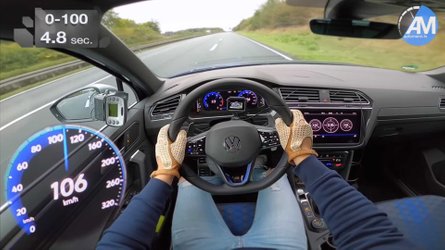 2021 VW Tiguan R quicker than advertised even on damp road
⠀ 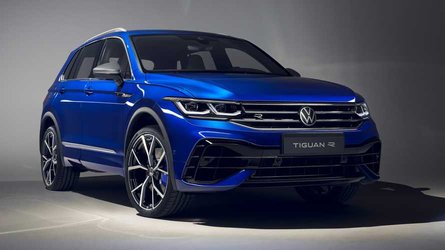 “The Tiguan has long been regarded as Volkswagen’s ultimate all-rounder, possessing space, power, quality, flexibility and the security of 4Motion four-wheel drive,” said Andrew Savvas, the managing director at Volkswagen UK. “Now, the Tiguan has another feather in its cap – a genuine performance SUV model, honed for spirited drivers by Volkswagen’s respected R division, complete with the impressive R-Performance Torque Vectoring system. This makes it an even more thrilling and sporty driving experience.

“The arrival of the R goes one step further to demonstrate the versatility of the Tiguan range, only a week after two new punchy petrol variants were added to the line-up. With a range of talents like this, it’s little wonder that the Tiguan was the best-selling Volkswagen SUV across the globe last year.”