Putting the super in supermini, the new Fabia brings back four-cylinder power with 150 horses.

After releasing a shadowy teaser image vaguely hinting at the Fabia’s side profile earlier this month, Skoda is back with a full gallery depicting a camouflaged prototype. Not only that, but the Czech brand is also disclosing a lot of technical specifications to ease the wait until the world premiere programmed for later this year.

First things first – the revamped Fabia is considerably larger than its predecessor and is now bigger than the mechanically related Volkswagen Polo, SEAT Ibiza, and Audi A1. At 4,107 millimetres long, 1,780 mm wide, and 1,460 mm tall, the fourth-generation supermini is only a little bit shorter than a Golf Mk4 while being wider and taller. It also has a longer wheelbase than Wolfsburg's compact hatch.

The growth spurt corroborated with the improved packaging brought by the MQB-A0 platform will allow the new Skoda Fabia to be the most practical model in its segment. At 380 litres, the cargo volume has increased by 50 litres compared to its predecessor, eclipsing its VAG siblings (while matching the Golf Mk8) as well as external rivals such as the Peugeot 208 / Opel Corsa, Renault Clio, Ford Fiesta, and Dacia Sandero.

Fold down the rear seats and the cargo capacity grows to 1,190 litres. Needless to say, the already confirmed estate will be even more spacious behind the rear seats.

There should also be copious amounts of legroom for a subcompact hatchback following a stretch of the wheelbase of nearly 100 mm over the Fabia Mk3. Despite the bump in size, Skoda says its engineers have managed to largely retain the weight of its predecessor thanks to the new underpinnings.

In addition, the little giant pledges to become the most aerodynamic car in its class, with the drag coefficient dropping from 0.32 to 0.28 with the generation switch. This is partially achieved by implementing an actively adjustable radiator shutter in the lower air intake of the front bumper.

Good news to share in terms of engines as the all-new Fabia will once again be offered with a four-cylinder engine. Skoda has decided to install the turbocharged 1.5-litre petrol mill in the B-segment hatchback where it will deliver 150 PS and 250 Nm (184 lb-ft) as in other VW Group products. It will be available exclusively with a seven-speed, dual-clutch automatic transmission. It’ll boast cylinder deactivation tech by automatically shutting off two of the cylinders when the engine’s full power is not needed as a way to cut fuel consumption.

Perhaps also a surprise is Skoda’s decision to soldier on with the 1.0 MPI naturally aspirated three-pot engine, offered in two states of tune and a five-speed manual. The midlevel models will come with a 1.0 TSI also in two output flavours, with the beefier of the two swapping the five-speed manual for a six-speed while adding an optional seven-speed DSG.

All engines are part of the Evo family, with the TSIs featuring a gasoline particulate filter. Unsurprisingly, the diesel will not be making a return after getting the proverbial axe with the outgoing model's facelift in early 2018.

The Mladá Boleslav marque is providing additional details beyond the vehicle’s dimensions and available powertrains. We get to learn it will be available with full-LED headlights and taillights as well as a digital driver’s display (Virtual Cockpit), nine airbags, and an optional larger fuel tank. The latter increases capacity from the standard 40 litres to 50 litres, boosting the Fabia's range to more than 950 kilometres (590 miles), although the engine used for the calculation isn’t specified.

It wouldn’t be a proper Skoda without an array of Simply Clever features, and the overhauled Fabia has some goodies no other model from the range offers. There’s a foldable flexible storage compartment in the boot, a removable cup holder, and a removable sun visor for the panoramic roof.

In addition, the storage compartment in front of the gearshift lever incorporates a card and pen holder while in front of the rear seats there’s an additional storage area, complete with a cup holder. All told, there are no fewer than 43 neat little features, including an optional USB-C port in the interior rearview mirror to power a dashcam.

The funky body wrap gets in the way of discovering the finer details, but the new Fabia appears to have a sharper design and you can tell it has significantly grown in size. Images of the interior have not been provided, although Skoda mentions it has installed a “central, free-standing display,” which is just a fancy way of saying it has one of those tablet-like infotainments. New colours on the outside and fresh materials on the inside round off the changes.

The new Skoda Fabia will be revealed later this year when we'll also get to see the facelifted Polo and possibly the updated Ibiza as well towards the end of it. As for the A1, it might not live past this generation since Audi admits its mainstream siblings are more popular. Even if Ingolstadt's supermini won't be renewed for a next-gen model, the current car is sticking around since it only came out about three years ago.

The all-new Fabia is almost here, but only the hatchback: 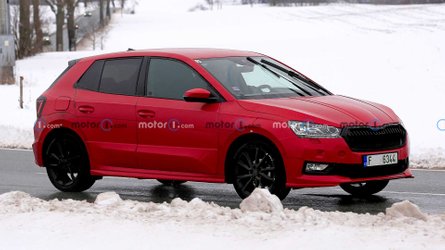 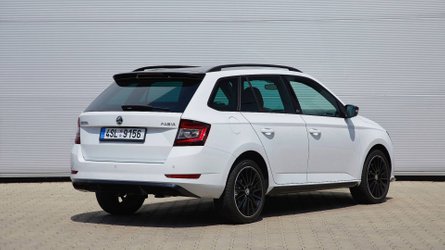 As a final note, the next-gen Fabia Combi is expected towards the end of 2022 or early 2023. Until then, the current subcompact estate will soldier on as Skoda will sell it alongside the new hatchback.