Knight Rider lorry found after being abandoned for 15 years

It’ll be restored to its former on-screen glory.

Movies and TV shows have helped introduce millions to the automobile. However, after the curtain closes and production wraps, these iconic vehicles are often stored away, sold, or destroyed, leaving hard-core fans to play detective in tracking them down.

The group Knight Riders Historians have been searching for the show’s on-screen stars and recently found the FLAG Mobile Unit – a GMC General articulated lorry and KITT’s mobile garage – abandoned in Idaho USA.

It took the organisation years to track it down, obtaining an out-dated mainframe from Vista Group, a company that provided vehicles to TV and movie studios. According to the video, not even professional data recovery services could help retrieve the mainframe’s data, which included year, make, and model information, VINs, and what movie productions the vehicle appeared in. However, after some unconventional workarounds, the group obtained nearly all the data, including that of the GMC General that appeared on “Knight Rider” and other productions.

The show must go on: 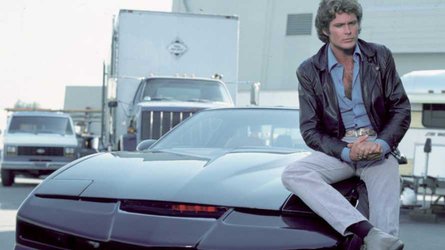 Hollywood not done with Knight Rider, movie in development

Detective work helped find the owner, and in late 2019, the group made an unannounced visit to the owner who had parked it. It’d racked up 230,000 miles hauling food produce after its 15 minutes of fame was up – and then left abandoned. A close inspection found a VIN matching the one in the mainframe and a studio tag sticker that was similar to tags found on other on-screen “Knight Rider” vehicles. Knight Rider Historians found the cab painted blue and missing its fake sleeper, though black paint was found underneath.

The organisation is now searching for the truck’s trailer, which was last known to have existed in the mid-2000s. Tracking it down sounds like it’d be a challenge, especially since it was painted silver or white after production ended. The foundation plans to restore the GMC semi to its full on-screen glory, making a perfect pairing to the other original KITT cars in the Historians’ possession.