It’s the first Mitsu product to benefit from the company’s partnership with Nissan.

The 2022 Mitsubishi Outlander is finally here, and it looks good. Replacing an SUV that felt outdated even when it debuted in 2012, the next-generation Outlander crossover also benefits from Mitsubishi’s fledgling partnership with Nissan, which the spreadsheet repeatedly proves – its powertrain, wheelbase, and several interior parts are shared with the US-market 2021 Nissan Rogue. Mitsubishi adds a standard third-row seat.

It’s also a stylish compact crossover, with the latest iteration of Mitsubishi’s “dynamic shield” styling motif and a blockier, more traditional stance that reminds us somewhat of the old chop-top Montero Sport. And its interior receives a wholesale update with improved fit and finish, more space, and a standard 8.0-inch or optional 9.0-inch centre touchscreen that finally does away with the company’s old, dated infotainment system.

The 2022 Mitsubishi Outlander takes its stylistic inspiration from the Engelberg Tourer concept, though it’s been toned down for series production somewhat. However, the split-headlight arrangement remains, which gives the Mitsu a distinctive appearance – razor-thin LEDs up high serve as the daytime running lights and turn signals, while a three-zone lighting element lower on the bumper incorporates the LED fog lights and high and low beams.

The company says that the C-shaped strips of chrome on either side of the grille are meant to recall the brush guards one might find on an old Montero SUV, while the bumper’s lower opening pays homage to the Lancer Evolution X. We’re not positive we see much of the latter, but it’s impossible to deny that the new Outlander is far more exuberantly styled than its predecessor. The Engelberg Tourer’s side profile ports over largely unchanged in the new Outlander, with available 20-inch wheels and bulging front and rear wheel arches imparting a planted, rally-raider stance.

An upright greenhouse and thick D-pillar look appropriately SUV-like, though we’re not sure third-row passengers will feel anything but claustrophobic given those smallish rear quarter windows. The rear view features crisp, thin taillights that echo the front driving lights, as well as a bulging hexagon on the hatch skin that Mitsubishi says is meant to recall the external spare tires of its previous SUVs. However, we think an actual spare tire would have worked better in that regard.

Any comparisons to the husky Montero or the snarling Lancer Evolution end when peering under the bonnet of the Outlander. A 2.5-litre inline-four and continuously variable transmission, shared with the Nissan Rogue, send 181 bhp (135 kilowatts) and 181 pound-feet (245 newton-metres) to the front or all four wheels. As on the Rogue, this powertrain option should be adequate for most daily driving tasks, although it might feel a bit dull when the Outlander is loaded down with seven passengers and their cargo.

Still, customers in this class are typically interested in fuel economy instead of outright speed, and Mitsubishi promises better efficiency from the new Outlander’s engine relative to its predecessor. We’d expect to see 26 miles per gallon city, 32 highway, and 28 combined for the two-wheel-drive model and 25/31/27 from the all-wheel-driver.

That four-wheel-drive system is called Super All-Wheel Control in Mitsubishi parlance, integrating a hydraulic centre clutch to portion torque instantly to the front and rear axles, and it doesn’t rely on wheel slip to send power to the opposite end of the vehicle. If slip is detected, the system brakes the spinning wheel to keep power headed to those with traction instead. The Outlander can also selectively brake individual wheels in corners to reduce understeer and provide more stability.

Inside, it’s not hard to see Nissan’s influence on the design and layout of the new Outlander. Both infotainment screens come straight from the Rogue, as do the HVAC controls, available 12.3-inch digital instrument cluster, head-up display, and electronic shift selector. If you have to copy someone else's homework, the A-student 2021 Rogue is a good place to start, and fit and finish look much improved relative to any current Mitsu.

Mitsubishi dresses up its cabin with some brand-specific colour options, as well as semi-aniline leather and genuine aluminium trim on top-shelf models, a knurled finish on the drive mode selector and other knobs, and an attractive four-spoke steering wheel that looks ripped straight from a 2006 Montero (which we mean as a compliment). What’s more, the Outlander offers a 106.5-inch wheelbase that's 1.4 inches longer than its predecessor. That translates into 1.0 and 1.1 inches of added legroom for the front and second rows, and the interior is 0.3-inch wider overall than before. 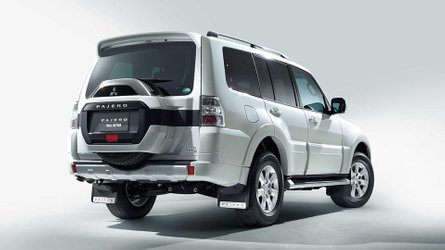 Mitsubishi Pajero Finally Going Out Of Production In 2021: Report
⠀ 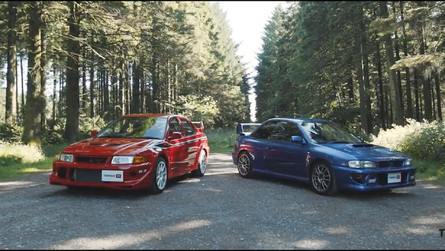 Subaru Impreza 22B Faces Off Against Mitsubishi Lancer Evolution

The third row split-folds 50/50 for added cargo room, while the second row gets a 40/20/40 arrangement. With both rows flat, the cargo area is 80.3 inches long in total, an increase of 15.9 inches, with a width of 37.4 inches (versus 31.5 in the outgoing SUV). It should prove a useful increase in both seats-up and maximum cargo capacity, though Mitsubishi hasn't revealed specific numbers yet.

You already saw this one coming, but the 2022 Outlander offers more standard and available safety features than its predecessor, all using rebranded Nissan technology called MI Pilot Assist. Adaptive cruise control and lane-keep assist reduces driver fatigue on the highway, and we wouldn't be surprised if it also coordinated with the navigation system on models so equipped to reduce speed in advance of curves. It also offers some traffic jam assistance, bringing the Outlander to a halt in heavy traffic and accelerating if the vehicle has been stopped for less than 30 seconds.

Traffic sign recognition, automatic high beams, predictive forward collision monitoring, automatic emergency braking, blind spot warning, and lane-departure intervention round out the long list of driver-assist technology. We suspect equipment levels to match that of the Rogue, with emergency braking, collision warning, and lane-keep assistance standard on even the base Outlander, and blind spot monitoring, adaptive cruise control, and lane centring found only on midlevel models and higher.

Since it's based so heavily on the Rogue, the 2022 Mitsubishi Outlander asks the question: Why would you choose it over a vehicle that we've driven (and liked) several times since its 2021 redesign? Of course, the standard third-row seat is a huge draw for potential customers, offering a pair of aft seats appropriate for small children and emergency carpool duties. Some might find themselves attracted to the aggressively techno styling of the Outlander over the avant garde, artistic Rogue.

For many buyers, the decision will likely come down to the bottom line. Unfortunately, there's no official word from Mitsubishi regarding how much they'll charge for the 2022 Outlander. If it follows its predecessor's suit, it will likely be the cheapest three-row SUV on the market, and it might even undercut the two-row Rogue if we're lucky. If that's the case, the 2022 Mitsubishi Outlander should prepare itself for a newfound rush of popularity.

Unfortunately, the 2022 Outlander is initially heading to the United States, Canada and Puerto Rico, whilst the current generation model continues to be a UK best-seller in PHEV form. Market launch starts this April and other markets, excluding Europe, will follow in due course.