The spindle grille is sticking around.

In 2014, the Lexus lineup lacked a compact crossover. The Japanese luxury brand rectified its situation with the introduction of the Lexus NX for the 2015 model year. Sales for the model peaked in 2018 and have fallen from 62,079 to 55,785 in 2020. The second-generation model is under development – as evident by a batch of spy shots – and our colleagues at Motor.es created an unofficial rendering previewing the new crossover’s new design.

Lexus engineers did stellar work covering the new NX, hiding many of the crossover’s design details underneath panels and camouflage. However, it appears the spy photos show the crossover receiving an evolutionary design, and that’s the route the rendering takes. The rendering shows the model retaining the brand’s controversial spindle grille. Stylized intakes pushed to the lower bumper corners sit below thin-slit headlights. The side profile also keeps the current crossover’s bold body creases.

The rendering doesn’t show the interior, which should receive a substantial update over the one offered in the current model. The infotainment screen could grow to up to 14 inches in size. The rendering fails to show the rear, which will likely look similar to the current model if it keeps with the rest of the redesign. Customers should expect revised taillights and a new bumper design at a minimum. 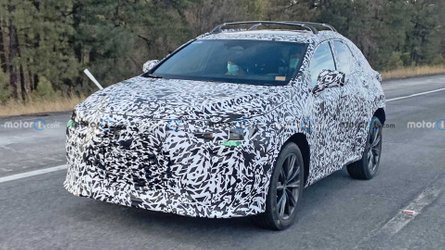 The next-gen NX will share its platform with the Toyota RAV4 – both utilizing Toyota’s TNGA-K platform. Lexus will likely pillage other bits from the RAV4, too, including the 2.5-litrе four-cylinder. The NX could also receive the RAV4 Prime’s hybrid powertrain while the company offers the Camry’s 3.5-litrе V6 as the optional upgrade. Lexus should debut the new model sometime later this year before it goes on sale for the 2022 model year.