The full debut is later in the spring.

A driver caught the 2022 Honda Civic Hatchback cruising down a road adjacent to the Ohio State University campus in Columbus, Ohio. The car is wearing some of the most bulbous camouflage that we've ever seen.

The clip opens with the Civic Hatchback pulling away from a traffic light. Black fabric covers the entire vehicle but leaves the trapezoidal exhausts exposed. The driver with the camera gets through traffic and is able to pull next to the concealed vehicle. The arching roofline is still clearly visible, despite the camo. Inside, there's fabric over the dashboard.

Near the end of the video, the camera car is able to get ahead of the Civic Hatchback. The camouflage is even more bulbous here, and there's a swirling wrap covering the little bit that is visible. The headlights appear to be the production-spec units and look nearly identical to the ones on the Civic Prototype concept.

If you're wondering why a camouflaged Civic is driving around Columbus, OH, remember that Honda has a massive manufacturing and engineering presence in the state. Honda R&D Americas has a site in Raymond, OH, that specialises in prototype development and testing, among other things. The place is only about 45 minutes north of Columbus. 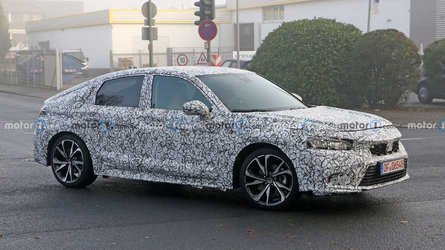 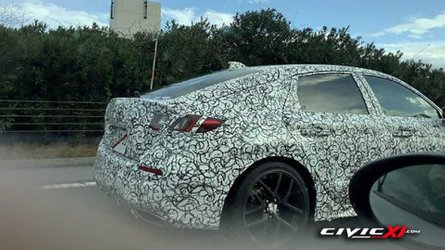 The good news is that the design trademark filing (gallery above) provides a much better idea about how the new Civic Hatchback looks. The liftback-style rear gives the back a sleek appearance that might appeal to any buyers who miss the Civic Coupe.

The production version of the next-gen Civic debuts in late spring this year. All models will now have manufacturing in North America. This will include building the hatchback in Indiana, rather than Swindon, UK.