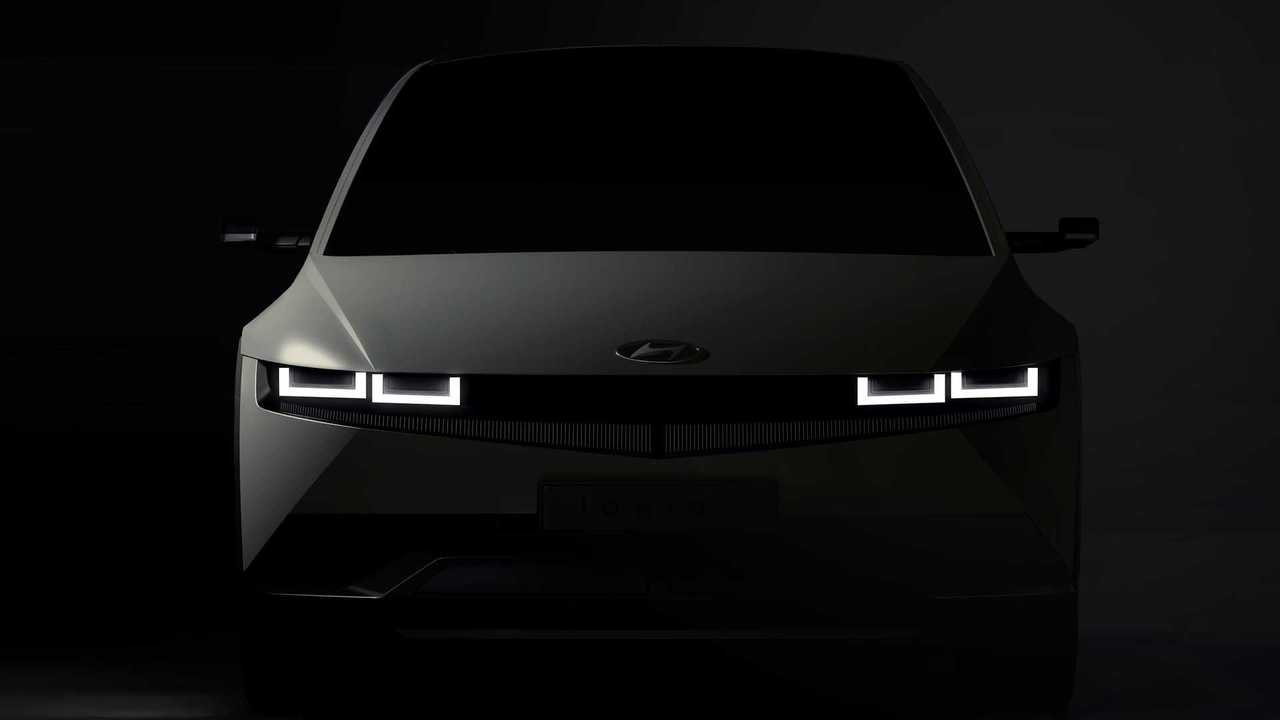 The electric SUV will take its first official bow next month before going on sale this year.

Slated for an official reveal in February, Hyundai started drumming up anticipation for the 2022 Ioniq 5 electric vehicle today with a trio of teasers. The SUV, which will ride on the company's new Electric-Global Modular Platform (E-GMP) architecture, looks like it will be much crisper and more sharply styled than the current Ioniq hatchback, showing that Hyundai's new EV sub-brand will share little with its namesake.

Although little is visible in the shadowy, computer-generated teaser images, one thing is certain: Hyundai is banking hard on the so-called Parametric Pixels design feature. Hyundai says those individual lighting elements on the front and rear take inspiration from "the smallest unit of digital imaging." Four square-U daytime running lights and four rounded rectangles on the taillights paying homage to the humble pixel, imparting a tech-chic appearance along the way. Up front, the Ioniq 5 will get a clamshell bonnet – Hyundai's first – reducing the appearance of panel gaps and improving aerodynamics as well.

Attractive 20-inch wheels boast a geometric, turbine-look design, and the teaser image shows the front wheels stretched forward rather far. That's because the new E-GMP architecture allows for much more flexibility in proportions, allowing the Ioniq 5 to avoid the form limitations of a traditional internal-combustion automobile.

The Ioniq 5 will be the first Hyundai to ride on E-GMP, which features a flat, skateboard-like array of batteries under the vehicle floor. E-GMP is rear-wheel drive thanks to a powerful electric motor on the rear axle, but being an SUV, the  Ioniq 5 will come standard with an additional motor on the front axle. The architecture will also be capable of fast-charging that can add 62 miles (100 kilometres) of range with in just five minutes using the WLTP standard, and according to a recent leak, the Ioniq 5 will boast a maximum range of 342 miles.

It's impossible to make sweeping claims based on the teasers, but the 2022 Hyundai Ioniq 5 looks like it will be distinctive at the very least. The front end looks remarkably short, giving it a cab-forward appearance that should open up plenty of passenger space – possibly at the expense of space-pod styling. And the rear teaser has shadows of the Austin Princess in that smooth hatch, looking both avant garde and slightly retro. It's an interesting combination of design features, and we look forward to seeing them meld together when Hyundai reveals the Ioniq 5 EV sport-ute in full.