A rematch for the non-believers.

We've seen this race before. Toyota's newest, rally-bred homologation versus Honda's decorated track monster that trumps a lot of its contemporaries. Both highly capable and pleasant to look at, but the Toyota GR Yaris beat the Honda Civic Type R in a straight-line race before.

The previous drag race between the two was less than ideal, though. The tarmac was wet and the front-wheel-driven Civic Type R struggled to gain traction versus the all-paw GR Yaris. It was a lopsided race, so to speak, so here's a rematch for the non-believers.

Hosted this time by YouTube's Motor, the Civic Type R got the chance to redeem itself versus the well-hyped Toyota in a drag race, thankfully on equal footing with the GR Yaris. The drag strip was dry and hot, while the matchup actually got a best-of-three series to solidify the win.

However, despite the 59-bhp power advantage of the Civic Type R, it struggled to get off the line as quickly as the GR Yaris, enough to give the three-pot Toyota the win in all three tries. The Honda's over 100-kilogram weight penalty didn't help its cause, so we're not entirely surprised at all.

A rally car for the road: 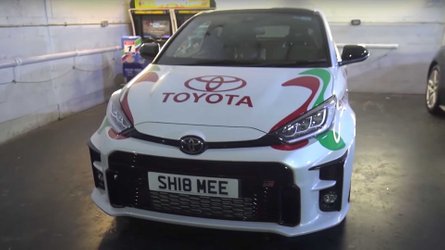 Then again, we all know that these two hot hatches are better compared with their lap times rather than on a quarter-mile basis. The Civic Type R is renowned for its handling traits, and so is the GR Yaris.

We hope someone out there hosts a lap comparison between the two. Until then, we'll know which of these is really the better hot hatch. For now, Toyota takes this from Honda once more.