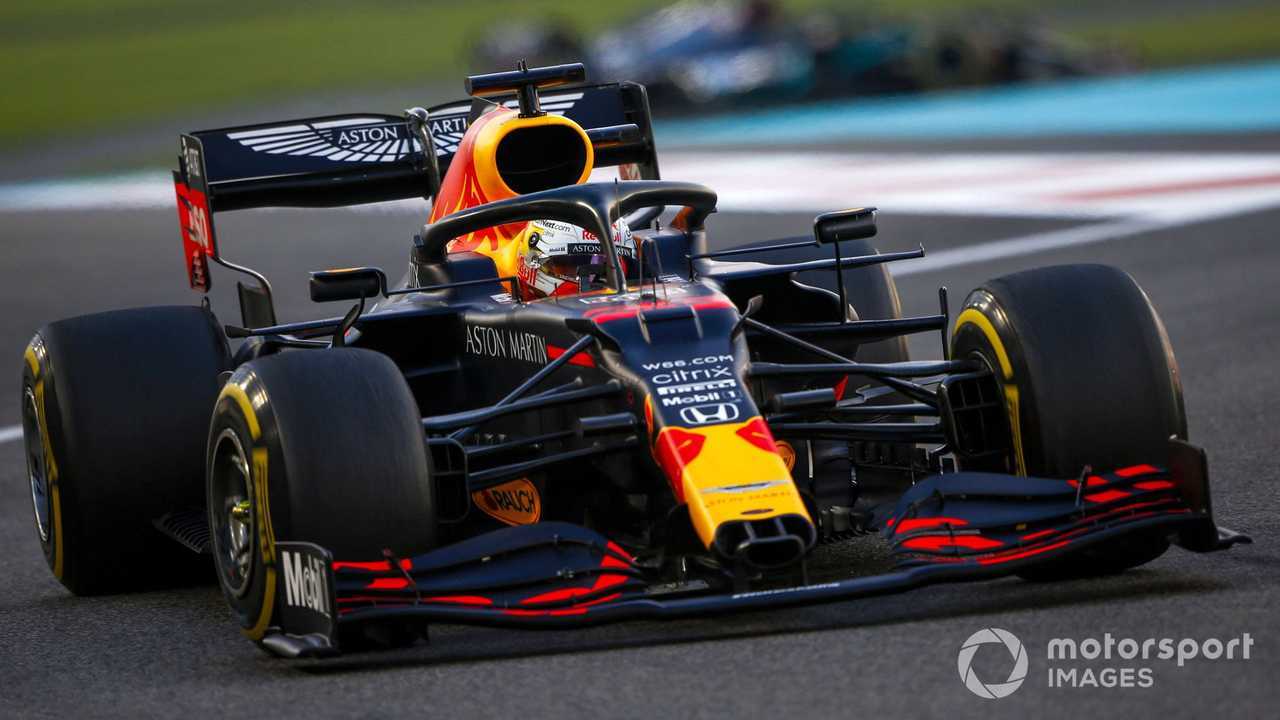 Max Verstappen dominated the Abu Dhabi GP, winning ahead of Bottas and Hamilton as F1's 2020 season ended with a straightforward race.

At the start, the top three appeared to launch equally well, with Verstappen moving to the middle of the track from pole to ward off any threat of attack from the Mercedes cars behind, scampering clear as Bottas had a slight slide exiting the first corner.

The race quickly settled down, with the top three running as they lined up on the grid, as Verstappen quickly pulled a healthy gap to the following Black Arrows.

Verstappen edged his lead up to three seconds over the next five laps, but had to surrender that when the race was neutralised – first with a virtual safety car, then a full safety car – after Sergio Perez retired with what appeared to be a transmission problem exiting Turn 19 on lap nine.

The Racing Point driver, who had been working his way up from P19 on the grid following his pre-race penalty for taking a fresh power unit, pulled over to the side of the track just past the left-hander under the W Hotel in the third sector after losing drive.

The top three immediately pitted – then under the VSC – to switch their mediums for hards, with the situation upgraded to a full safety car as the Racing Point could not be quickly moved out of harms way.

That meant Verstappen's lead was erased, but he quickly set about re-establishing it after acing the restart at the beginning of lap 14 – pulling away by 1.4s in the ensuing tour.

The leaders were then able to run in the 1m41s as they ran clear of Alex Albon, who had passed McLaren's Lando Norris shortly before Perez retired, with Hamilton again falling a chunk behind Bottas in third.

Verstappen kept increasing his advantage, despite concerns about making his hard tyres last to the finish, during the next phase of the race, where he was regularly able to lap in the low 1m41s while the Mercedes drivers swung between the mid-high 1m41s.

By lap 35, Verstappen's advantage had reached eight seconds, as he committed to controlling the careful way he treated his front and rear tyres to maintain the balance he was enjoying.

Although the gap between the top two then ebbed and flowed fractionally between Verstappen and Bottas as they negotiated backmarkers, with the leader concerned about vibrations he was feeling as his tyres wore further with just over 10 laps to go, but the Red Bull driver never looked under major threat.

He came home to win by 15.9s after staying in the 1m41s in the final stages as the Mercedes regularly fell back to the 1m42s, with Hamilton finishing 2.4s behind Bottas on his return following his COVID-19-enforced absence after the Bahrain GP.

The world champion had closed in on his teammate during the closing phase of the race, but never looking like he'd be able to get close enough to make a pass and indeed fell back away in the final laps.

Albon finished 1.5s behind Hamilton, closing in suddenly as the laps ticked down to the flag, with Norris leading home his teammate Carlos Sainz in fifth and sixth.

The result secures P3 in the constructors' championship for McLaren, although Sainz faces a post-race investigation for possibly going too slowly in the pitlane during the VSC when running in front of Lance Stroll, before he arrived for the second part of McLaren's double-stack stop.

Daniel Ricciardo rose from 11th on the grid to finish seventh, not stopping under the VSC to leap up the order and then running long on the hards he had started the race on.

In his final race for Renault, Ricciardo was able to produce strong pace as his long opening stint wore on, but after he'd pitted to take the mediums with 16 laps left the tyre advantage he had was not significant enough for him to close in on the driver he will replace at McLaren 2021.

Pierre Gasly took eighth, putting a firm pass at Turn 11 on Stroll's remaining Racing Point just past half-distance, with Esteban Ocon getting ahead late on to steal ninth.

Stroll therefore rounded out the top 10 ahead of Daniil Kvyat.

Charles Leclerc finished 13th ahead of Sebastian Vettel in the four-time world champion's final race for Ferrari, with the duo also not stopping under the VSC to climb up the order before they fell back struggling for grip compared to those that had come in earlier.