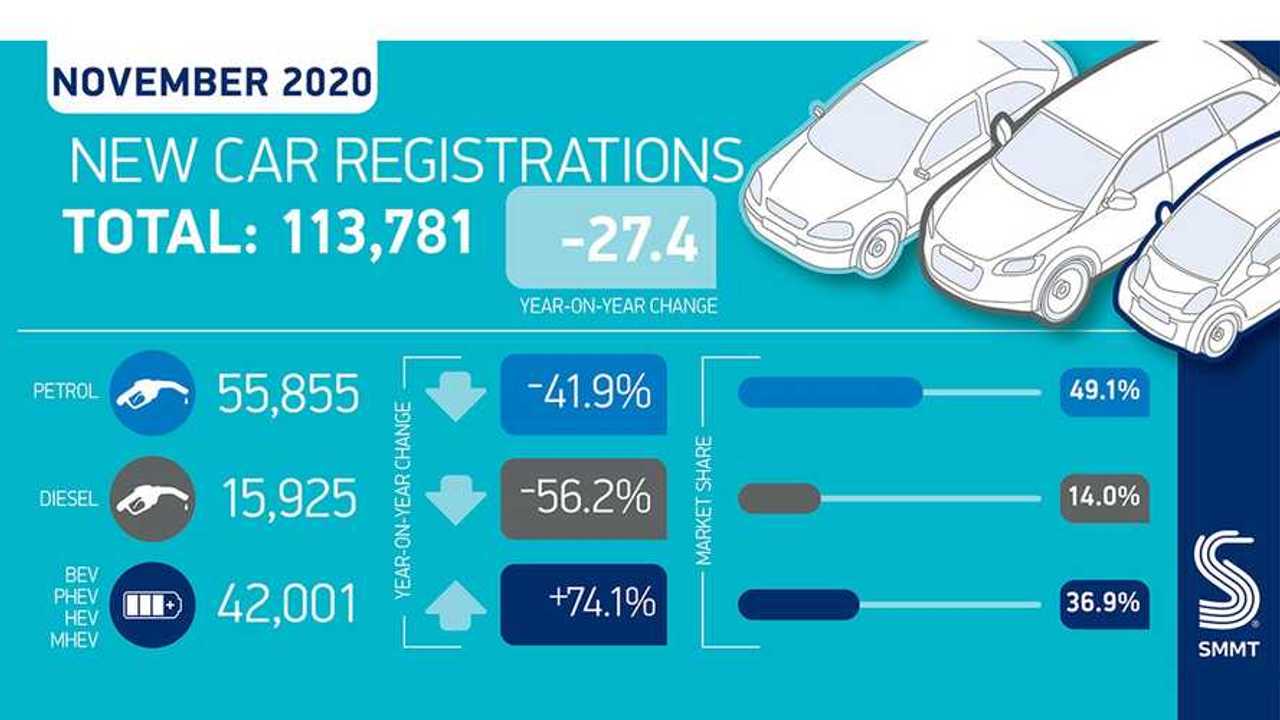 New car sales have now fallen to levels last seen during the 2008 recession.

Last month saw new car registrations fall by more than 27 percent compared with the same month last year, new figures have revealed. The Society of Motor Manufacturers and Traders (SMMT), which represents car makers and dealers, said the shortfall was partly down to the English lockdown, which effectively closed dealer showrooms.

The SMMT’s data showed a total of 113,781 new cars were registered in the UK last month, down from 156,621 in November 2019. That reduction means new car sales have now fallen to levels last seen during the recession of 2008.

As is becoming the norm, sales were down across the petrol and diesel markets, which bore the brunt of the drop in demand. However, sales of plug-in hybrids and electric vehicles remained way ahead of 2019 levels, with demand for pure electric cars more than doubling. More than 10,300 new electric vehicles (EVs) were registered last month.

It’s a pattern that has been seen all year, with more than 86,000 EVs registered during the first 11 months of 2020. By the end of November 2019, just under 33,000 new EVs had been registered. However, EVs still account for just under six percent of the market, while petrol makes up almost two-thirds of all UK car sales.

As a result, new car sales are down by almost a third over the first 11 months of 2020, with just under 1.5 million vehicles registered. By the same point in 2019, more than 2.16 million cars had hit the roads of the UK.

Although there’s no hope of a miraculous recovery in December, the SMMT has made slightly more upbeat noises about the future prospects. With the introduction of a vaccine on the horizon, the organisation’s chief executive, Mike Hawes, said there was a chance that consumer confidence might “improve” in the new year.

“Compared with the spring lockdown, manufacturers, dealers and consumers were all better prepared to adjust to constrained trading conditions,” he said. “But with £1.3 billion worth of new car revenue lost in November alone, the importance of showroom trading to the UK economy is evident and we must ensure they remain open in any future Covid-19 restrictions. More positively, with a vaccine now approved, the business and consumer confidence on which this sector depends can only improve, giving the industry more optimism for the turn of the year.”