The newcomer sits above the Premium Pack in the UX range.

Lexus has added a new mid-range Premium Sport Edition model to its UX 250h hybrid SUV line-up. Priced from just over £33,000, the new model sits just above the UX Premium Pack, adding a range of features in exchange for a £850 premium over the lowlier model.

Arriving in time for 2021, the newcomer is marked out by its all-black spindle grille mesh and frame and black 18-inch alloy wheels. The car also benefits from black door mirror casings, black roof rails and black-trimmed headlight units.

Inside, meanwhile, the car gets seats trimmed in black Tahara – Lexus’ man-made leather substitute, while satellite navigation also features. There’s some extra safety tech, too, in the form of a blind-spot monitoring system to detect cars in the hard-to-see areas over your shoulders and cross traffic alert, which warns of oncoming vehicles when reversing out of a parking space.

That’s in addition to the equipment normally found on a UX with the Premium Pack fitted. Such a configuration would ordinarily include front and rear parking sensors, heated seats and a heated steering wheel, as well as a reversing camera, automatic windscreen wipers and privacy glass.

Other features common to all UX hybrid models include LED headlights, push-button ignition and a seven-inch display screen. Adaptive cruise control, which maintains a safe distance to the vehicle in front, also features, alongside the Apple CarPlay and Android Auto smartphone integration systems.

More on the Lexus UX:

Lexus claims to have built the world's first tattooed car 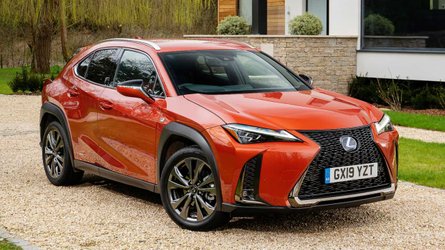 Up front, the Premium Sport Edition boasts the same hybrid powertrain as the rest of the UX range. Dubbed ‘250h’, it combines a 2-litre petrol engine with an electric motor to create a 181 bhp hybrid system. The vehicle can run on electricity alone for short distances and at low speeds, but the petrol engine takes most of the strain. Unlike a plug-in hybrid, the car cannot be plugged in, so the battery can only be charged by the petrol engine or through harvesting energy normally lost under braking.

Nevertheless, the system allows front-wheel-drive versions of the UX to return just over 50 mpg on the official WLTP economy test. The E-Four four-wheel-drive model is marginally less frugal, managing 47.1 mpg on the same independent test.

The Premium Sport Edition is now available to order from Lexus dealers, and it’s expected to take the lion’s share of new UX sales in 2021. Prices start from £33,150.