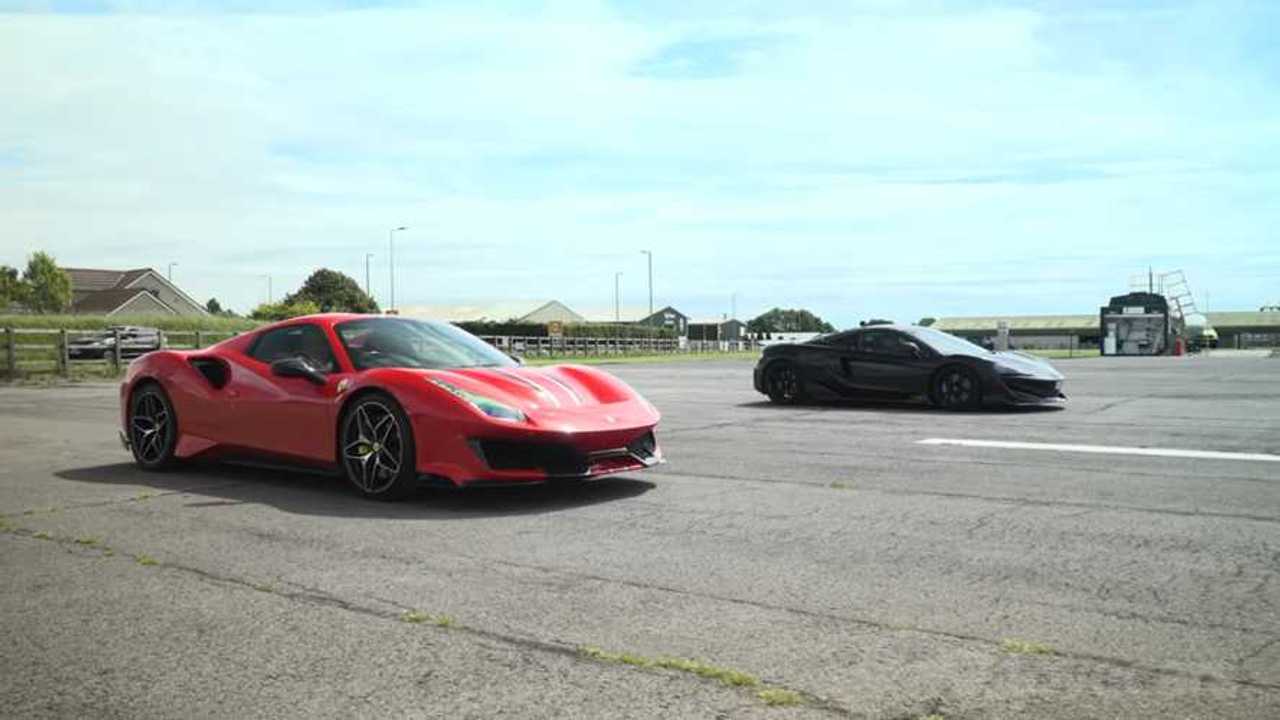 When supercars race, everyone wins.

[UPDATE] Video embedded above removed from YouTube - Before we dip into this drag race video, know that the end result might be met with some controversy.

We don't always spoil the final outcome in racing clips like this, but we will share that information later in the article if you aren't interested in watching the clip. But you should watch it, because the conclusion leaves us scratching our heads and frankly, it's why we're compelled to spill the beans.

The bean-spilling comes soon enough, but for now, here's what you need to know. This showdown is a contest of roofless spiders from England and Italy, specifically the Ferrari 488 Pista facing off against the McLaren 600LT. On paper, the cars make for a great matchup – each one boasts a small-displacement twin-turbocharged V8 engine positioned behind the driver, shifted via paddles through a sequential gearbox. In fact, the Ferrari's 3.9-litre mill is just 0.1 litres larger than the 3.8-litre engine in the McLaren. The two-seaters also weigh nearly the same, with the 600LT being just 30 kilograms (66 pounds) lighter than the Pista.

The stats don't entirely match up, however. The engine in the Ferrari is tuned to make 710 bhp (522 kilowatts), whereas the 600LT checks in at 592 bhp (441 kW). It doesn't take a genius to see the McLaren is seriously outmatched, and published figures for 60-mph sprints as well as top speed reflects that. At 2.8 seconds to 60 mph, the 488 Pista is just 0.1 tenths quicker, but at the other end, the Ferrari's 211-mph top speed is well above McLaren's stated 204-mph limit for the 600LT.

Of course, those stats are achieved in ideal conditions, and as Lovecars points out, its racing videos represent real-world situations. As such, the supercars are staged on an unprepped surface, and neither driver uses launch control. It's just driver skill utilising all the power, and when the starting flag drops, the Ferrari steps out to a clear lead. Here's where things go off the rail, because despite a massive power disadvantage, the 600LT comes from behind for the win. Wait, what?

If anything, we'd expect the Ferrari's 118-bhp advantage to come on strong once moving. Instead, we see the McLaren deliver a burst of speed at the other end of this quarter-mile contest to finish several car lengths ahead. Did the Ferrari driver let off the throttle too soon? It's certainly strange to see the 600LT suddenly leap past the Pista, and more than a few commenters in the video suggest as much. Or, is the 600LT packing more power than McLaren advertises? It's not the first time we've been surprised by the 600LT's punchy performance.

Sadly, only one race was held for this video. We'd very much like to see a rematch, if for no other reason than to hear these screaming V8s singing a supercar duet one more time.